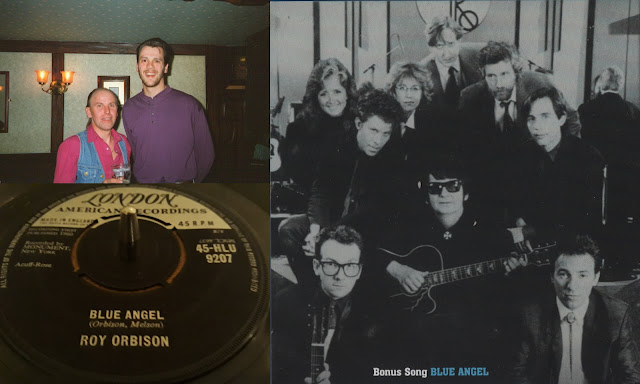 #1,651: I've always liked Roy Orbison. Before The Traveling Wilburys and before his musical liaison with ELO maestro Jeff Lynne. There is just something unique and ethereal about the voice of the man affectionally dubbed The Big O and his amazing roster of hits that commenced with his legendary songwriting partnership with Joe Melson including "Only The Lonely" and "Running Scared".
As with all fave artists, there is always one song that occupies our personal #1 spot. When it comes to Roy Orbison, that song is "Blue Angel" (London #45-HLU9207; UK #11; December 1960) and it's all thanx to none other than ELO bassist Kelly Groucutt on a rather emotional night some thirty years ago. Back then, Kelly used to take his one man show around various West Midlands pubs and perform mostly 50's, 60's and 70's classics (including, of course, the odd ELO tune). I still fondly recall his sublime renditions of songs such as "Vincent" and being introduced to "The Fox". It was at that time my son Adam passed away at just seven months of age and my good friend Christian Evans informed Kelly of the matter. I still remember KG picking up his microphone and launching into "Blue Angel" at The Dudley Arms in Himley.
It was an unbelievable moment that cemented this beautiful Orbisong at the top of my personal chart whilst opening up a deep if not rich interest in the music and lyrics of Roy Orbison which remains to this day here in Yours Truly 2022.
~ With continuing thanx to Mick 'Kelly' Groucutt and Christian Evans ~
*** Until next "Time" in the ELOBF Universe ... 09-Feb-2022 ***
Posted by Keith J Sinclair at 11:11