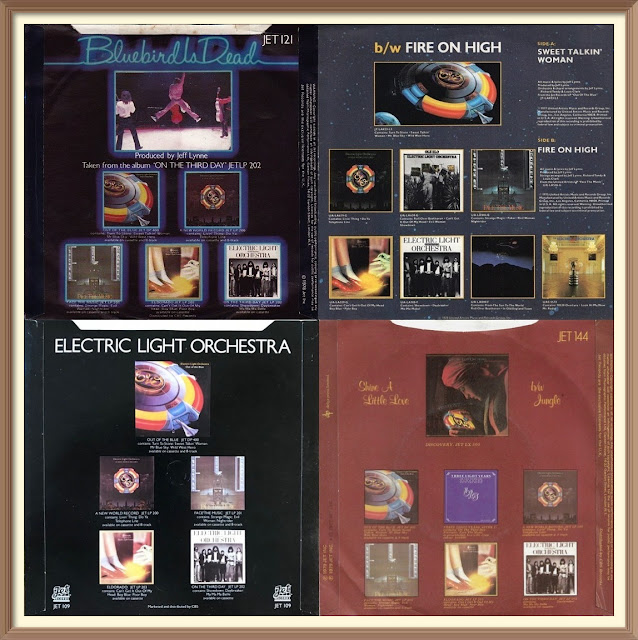 #1,645: Looking back at the days when ELO were at their commercial peak and practically every single was destined for the UK Top 10, it was very easy for new fans to find out their discography and go back through ELO's back catalogue when it came to their previous album output. It was a little different in America as the bands albums from 1972 onwards had all charted and they had remained (mostly) with United Artists Records and their success was already established whereas in Britain, ELO had swapped labels regularly and some of their classic albums such as Eldorado hadn't even charted. Yours Truly KJS was flicking through my 7" collection this week and remembered that around the release of latter Out Of The Blue singles Wild West Hero b/w Eldorado (SJET109) and Sweet Talkin' Woman b/w Bluebird Is Dead (SJET121) following the change in distribution from UA to CBS, ELO's album history was proudly displayed on the rear picture sleeves of the aforementioned singles as well as Shine A Little Love b/w Jungle (SJET144). Over in the States, Sweet Talkin Woman b/w Fire On High (JT-XW1145) was released as the second OOTB single (just before the UA/CBS transition) and listed everything - alerting a young KJS to a differently entitled first Electric Light Orchestra long player, an alternative sleeve for ELO II and a career spanning compilation! Jet Records were really good at marketing the ELO brand at that time thanx to the success of their singles, albums and extensive tours, another example being the Three Light Years boxed set (JETBX1). Truly, those were the days when walking six miles to buy the latest ELO release (hence saving the bus fare) had to be done!
Related KJS/ELOBF articles
Taken from the Album: ELO's Jet 'B' Sides
On the Flip Side: ELO's Jet 'B' Sides
ELO1JB: ELO's Jukebox Special
Chart Tragedy: ELO's UK Album Chart Famine
Olé ELO: Saluting ELO's First Successful Compilation
*** Until next "Time" in the ELOBF universe ... 07-Jan-2022 ***
Posted by Keith J Sinclair at 16:00