#1,648: Ever wondered what would be the shortest track officially released by the Electric Light Orchestra - especially in these days of expanded albums replete with bonus content, alternate takes, demos and rough mixes? Yours Truly KJS thought it would be interesting to plough through my CD & vinyl collection and list ELO/Jeff Lynne trax of under two minutes duration with a view to identifying the shortest ELO song albeit with a couple of caveats. Due to the fact that ELO Part II's Moment Of Truth album contains six sub-two minute length trax, I've excluded all three orchestral instrumental interludes, the four second long "Vixen" (spoken by Kelly Groucutt) and "The Leaving". Doubtless KJS/ELOBF might have missed one or three more examples but, at the time of writing, "Opening" from the Balance Of Power expanded remaster in 2007 takes the biscuit at 24 seconds with "Let It Rock" from Jeff Lynne's 2012 solo effort Long Wave bringing up the rear. 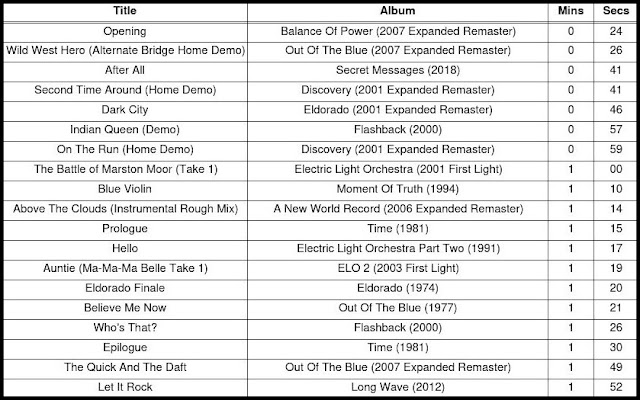 Please feel free to contact ELOBF and leave a comment with any corrections &/or further suggestions!
*** Until next "Time" in the ELOBF universe ... 24-Jan-2022 ***
Posted by Keith J Sinclair at 08:00