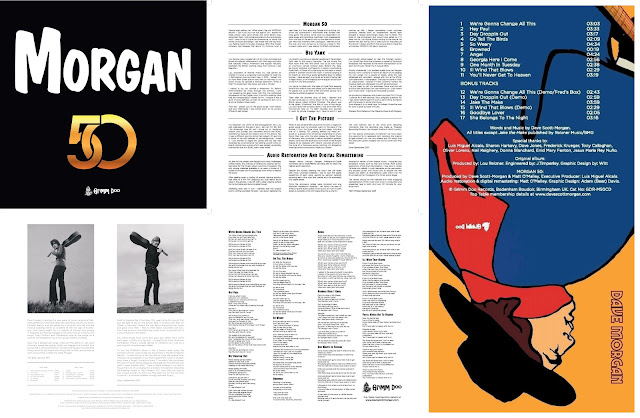 #1,644: Most ELO fans will be familiar with the Dave Morgan (now David Scott-Morgan) and his involvement with the band for their live performances from 1981 onwards as well as his contributions in the studio on "Secret Messages" and Jeff Lynne's "Armchair Theatre". Further investigation into his long career will reveal stints with The Uglys, Balls and Magnum plus a solid songwriting acumen, examples being "Something" (flip side of legendary #1 UK single "Blackberry Way" and "This Time Tomorrow" (B side of "Curly") by The Move as well as the amazing European success of "Hiroshima" - originally recorded by Wishful Thinking circa 1971 and a Top 10 single in Germany upon its reissue in 1978 (peaking at #8 during an incredible 44 week chart run) and later a #4 hit for Sandra. These days Dave works his musical magic with Morganisation and most recently he took a step back in time to celebrate the 50th anniversary of his own eponymously titled debut solo LP with "Morgan 50" - a new vinyl pressing replete with an expanded CD in its original German artwork.
Originally an eleven song outing, "Morgan 50" features six bonus trax added for the accompanying CD for an album that garnered more commercial appeal on the continent than here in the UK yet retains an enthusiatic charm showcasing, as it does, the talents of Dave Scott-Morgan. Produced by Lou Reizner (who incidently also produced the 2LP original soundtrack album for 1976's "All This and World War II" which, of course, included countributions by Jeff Lynne and Roy Wood), there's a certain interchangeability here between this record and Wishful Thinking's debut long player "Hiroshima" sharing not only producers, but also labels (Ampex, Global Records) and a trio of trax including "We're Gonna Change All This", "She Belongs To The Night" and "Goodbye Lover". This is very much an enjoyable, listenable record with the influence of Bob Dylan apparent on "Hey Paul" and The Beatles on "Georgia Here I Come". "Angel" and "You'll Never Get To Heaven" (quite ironic considering Dave's Christian faith) are two other great tunes to savour as is the aforementioned anthemic, positive opener/manifesto (and lead EU/US single) "We're Gonna Change All This". There's a refreshing familiarity reflected here that's found throughout all Dave's records up to the present whether it be rhythm, blues or unabashed folk. Released when the Electric Light Orchestra were simultaneously putting their musical feelers out in 1971, it therefore comes as no surprise (having joined their ranks for a period) that both Dave and ELO are still around and making (if not re-making) remarkable music here in Yours Truly 2022. ★★★★★
"Morgan 50" by Dave Scott-Morgan is available to purchase via this link thus:
musicglue.com/dave-scott-morgan/products/morgan-50-vinyl-slash-cd
ELO Beatles Forever (ELOBF) recommends "Morgan 50" by Dave Scott-Morgan to those enlightened folks who enjoy the music of Electric Light Orchestra/Jeff Lynne, Roy Wood, The Move, 'Brum Beat', The Beatles and related artistes.
*** Until next "Time" in the ELOBF universe ... 04-Jan-2022 ***
Posted by Keith J Sinclair at 08:30