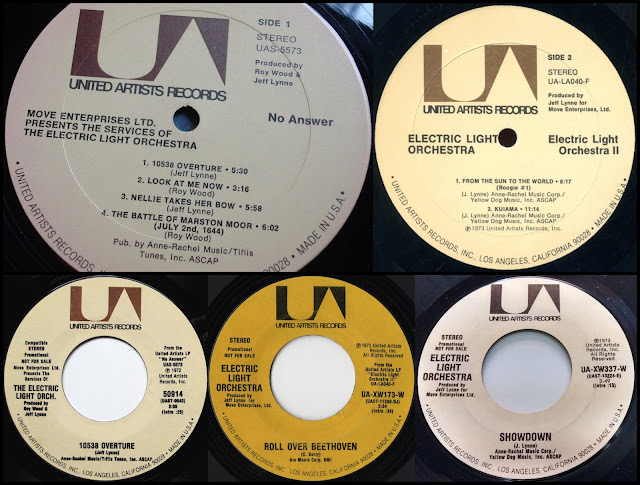 #1,639: Did you know that early ELO's stateside career on United Artists Records revealed more about their transition from The Move than in their home country on EMI's Harvest imprint? Whereas The Move (who were primarily Roy Wood, Bev Bevan & Jeff Lynne at that time - not forgetting Rick Price) were certainly more well known in the UK & Europe, the development of an Electric Light Orchestra was more of a known in the British music press than admitted on vinyl whilst across the Atlantic their first two studio albums "No Answer" (UAS-5573) and "Electric Light Orchestra II" (UA-LA040-F) as well as their first three US singles "10538 Overture" (50914), "Roll Over Beethoven" (UA-LA173-W) and "Showdown" (UA-LA337-W) all made reference to The Move on their labels.
American fans found the credit "Move Enterprises Ltd. Presents The Services Of THE ELECTRIC LIGHT ORCH." on their first album and single but for their second studio album and next two ensuing 7" issues, the UA label cited "Produced by Jeff Lynne for Move Enterprises, Ltd." ensuring that the duality of ELO and The Move was officially enshrined in record label text some five decades ago. Roy Wood's pride and enthusiasm for his ELO brainchild is unmistakable in the press interview below.