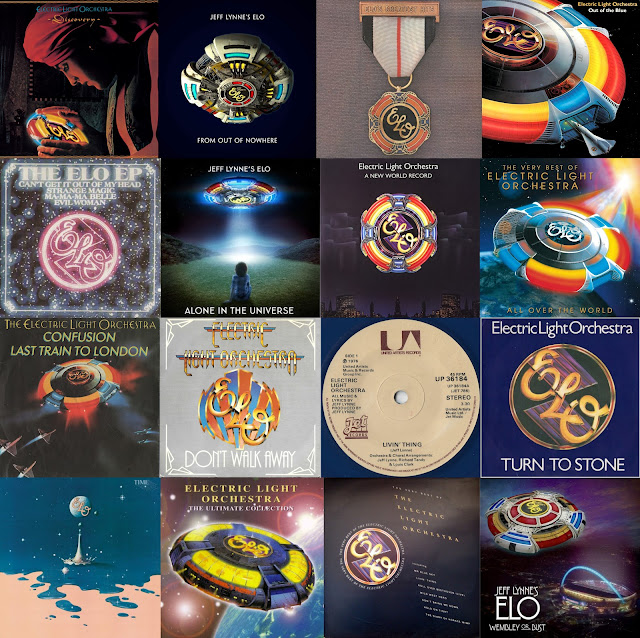 #1,641: Regular visitors will doubtless be aware that the progress of Wizzard's festive classic "I Wish It Could Be Christmas Every Day" in the UK Singles Chart is monitored here every year. You might also recall that Yours Truly KJS/ELOBF also noted ELO's twin album Christmas chart successes in 1979 and 2015 some six years ago too. It therefore seemed a rather good idea to spread the net a little further and take a look at where ELO stood at Christmas down the years in both the British Single and Album Chart bearing in mind that the Top 100 was once the Top 75 and before that the Top 50. The results of our data trawl (as shown in the tabulations below) will hopefully be of interest to ELO fans.

Looking at ELO's chart presence in the singles chart at Christmas, it's interesting to note that they were in the Top 40 for five consecutive years between 1976-80 aligning perfectly with their rising popularity. "Livin' Thing" was at #6 in 1976 (having peaked at #4 the previous week) with Mike Oldfield, Queen, Abba, Showaddywaddy and Johnny Mathis ahead of them. It's also noteworthy that one year later "Turn To Stone" was still in the Top 20 (having peaked at #18 two weeks earlier). The ELO EP spent four weeks in 1978 at a respectable #34 although the "Three Light Years" boxed set (surprisingly) did not trouble the album chart until January. "Confusion"/"Last Train To London" - the fourth single taken from "Discovery" (and ELO's debut 'AA' side) - was at #15 in 1979 (having peaked at #8 in early December). Their last Christmas hit came in 1980 with "Don't Walk Away" at #23 (having peaked at #21 two weeks previously). 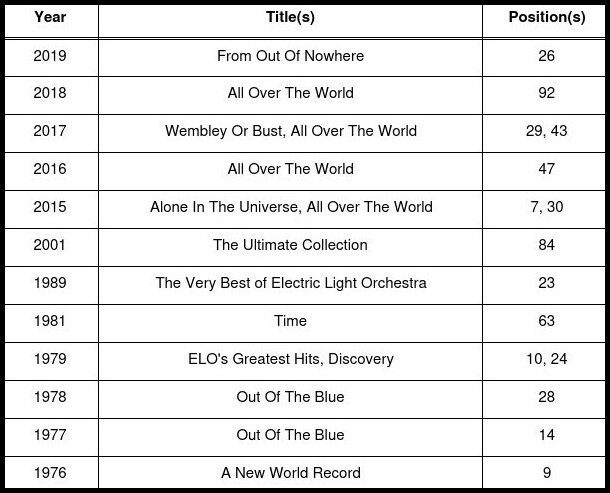 When it comes to the Electric Light Orchestra in the Christmas album chart down the years, there's essentially a divide between their most successful commercial period between 1976-81 and their resurgence from 2015 onwards. "A New World Record" was deservedly still in the Top 10 in 1976 and (not surprisingly) "Out Of The Blue" was found in the Top 30 in both 1977 & 1978. Two ELO LP's graced the Christmas chart in 1979 thanx to the momentum of debut #1 album "Discovery" and the timely release of "ELO's Greatest Hits" with "Time" hanging about in the lower reaches in 1981. The release of "Alone In The Universe" twinned with reignited sales for best selling compilation "All Over The World" meant another album chart double in 2015. The ensuing timely releases of "Wembley or Bust" in 2017 and "From Out of Nowhere" alongside continuing healthy sales for AOTW ensured that ELO were in the proverbial Christmas mix in 2019 too!