#1,634: I have friends and know folks who have seen Andy Louis and The ELO Experience literally hundreds of times down the years (Yours Truly KJS/ELOBF have seen them at least seventeen times!) and their loyalty is always rewarded, evidenced by their excellent performance last night (Thursday 18th November) at The Prince of Wales Theatre just down the road in nearby Cannock.
Once again, The ELO Experience justified their position as the UK's premier ELO tribute band in presenting an accomplished, professional and thoroughly entertaining set of twenty three Electric Light Orchestra classics from their debut UK hit single "10538 Overture" (#9; July 1972) to their final Top 20 hit "Rock 'n' Roll Is King" (#13; July 1983). The vibrant full house ensured an electric atmosphere as the Jeff Lynne songbook (plus a certain Chuck Berry penned tune also famously covered by The Beatles) was recreated on stage with the highlight undoubtedly being an accurate and polished rendition of the anthemic and uplifting "So Fine" from 1976's "A New World Record". Having previously enjoyed their take on the likes of "Across The Border", "Big Wheels", "Starlight", "Night In The City" and "Latitude 88 North", hearing another classic ELO album track performed live was the icing on the proverbial cake. ★★★★★
The ELO Experience performed: "All Over The World" ~ "Evil Woman" ~ "Telephone Line" ~ "The Diary Of Horace Wimp" ~ "So Fine" ~ "Showdown" ~ "Wild West Hero" ~ "Shine A Little Love" ~ "Xanadu" ~ "Confusion" ~ "Livin' Thing" ~ "Prologue" ~ "Twilight" ~ "Sweet Talkin' Woman" ~ "10538 Overture" ~ "Turn To Stone" ~ "Last Train To London" ~ "Rock 'n' Roll Is King" ~ "Rockaria!" ~ "Hold On Tight" ~ "Roll Over Beethoven" ~ "Don't Bring Me Down" ~ "Mr. Blue Sky"
The ELO Experience were: Andy Louis (Lead vox/guitar) ~ Pete Smith (Bass/vox) ~ Chris Marsh (Keyboards/vocoder) ~ Jan Christiansen (Lead guitar/vox) ~ Tony Lawson (Drums) ~ Liz Stacey (Violin) ~ Francesca McDonald (Cello)
The ELO Experience continue to tour the UK extensively and you can view all their Tour Dates, sign their Guest Book and find out what they are currently up to via their official sites thus:
www.elotribute.com
facebook.com/The.ELO.Experience  twitter.com/ELOEXPERIENCE
ELO Beatles Forever (ELOBF) recommends The ELO Experience to those enlightened folks who enjoy the music of ELO/Jeff Lynne, The Move, Roy Wood, The Idle Race, The Beatles, 'Brum Beat' and related artistes.
Until next "Time" in the ELOBF Universe ... KJS ... 19-Nov-2021
Posted by Keith J Sinclair at 18:00 2 comments:

#1,633: Following the recent postponement of his 2021 dates, it was indeed good to see Dr. Roy Wood pop up in the news this week with coverage of his involvement with Nelson's Distillery and their new limited edition seasonal gin entitled Christmas Cheer thus:
nelsonsdistillery.co.uk/christmas-cheer-gin-roy-wood
business-live.co.uk/enterprise/wizzard-legend-roy-wood-teams-22122006 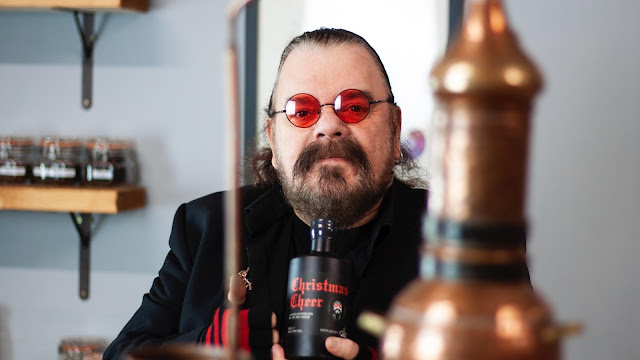 Christmas Cheer is priced at £29.95 for a 50cl bottle and can be bought (while stocks last) via this link thus:
nelsonsdistillery.co.uk/product/christmas-cheer-gin
Related KJS/ELOBF articles
Roy Wood: Live 2022 (Postponed 2021 Dates)
An Appreciation of Roy Wood
Christmas Classics: How Wizzard & Slade Compare
Forever Wizzard: The Success of Roy Wood's Christmas Classic
ELO Beatles Forever (ELOBF) recommends Roy Wood to those enlightened folks who enjoy the music of ELO/Jeff Lynne, Wizzard, The Move, The Idle Race, 'Brum Beat', The Beatles and related artistes.
*** Until next "Time" in the ELOBF Universe ... KJS ... 14-Nov-2021 ***
Posted by Keith J Sinclair at 06:00 2 comments:

#1,632: This writer was quite saddened to read the above article this week regarding the closure of Oldies Unlimited in Darlington Street, Wolverhampton on Tuesday 30th November (although it will continue online and at selected Midlands record fairs) and felt it would be apt to write a few words in fond memory of such a familiar friend. My first recollection of Oldies Unlimited would be picking up and flicking eagerly through the pages of their catalogue at Tom Hawkins Music Services in Oxley (another frequently visited establishment) or visiting the Oldies Unlimited shop (always rammed with vinyl) in Worcester Street. They were essentially a mail order franchise business back then based in nearby Telford and I remember ordering not a few ELO and related records in my early collecting days. A revamped Oldies Unlimited would later emerge in their current location and be a regular stop in my ever diminishing circuit of record shops in Wolverhampton city centre. Yours Truly KJS wishes Simon all the very best as he takes Oldies Unlimited into its new virtual home. Thanx for the memories!
Related KJS/ELOBF articles
Record Shop Memories: I Wish I Was Back in 1981
Recommended: Oldies Unlimited
Recommended: Vinyl & Vintage
ELO Beatles Forever (ELOBF) recommends Oldies Unlimited to those enlightened folks who enjoy the music of ELO/Jeff Lynne, Roy Wood, The Move, The Idle Race, 'Brum Beat', The Beatles and related artistes.
Until next "Time" in the ELOBF Universe ... KJS ... 11-Nov-2021
Posted by Keith J Sinclair at 09:00 No comments: 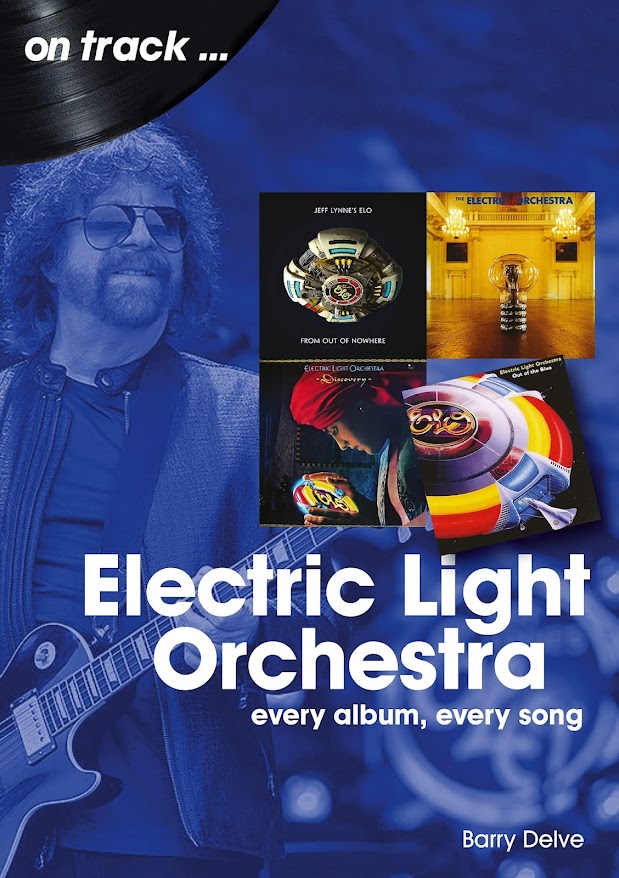 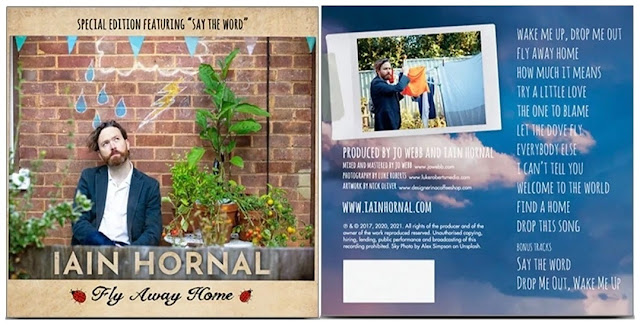 #1,630: An expanded special edition of Iain Hornal's excellent 2020 album "Fly Away Home" (co-produced by Jo Webb) is now available to buy via his official website. The Jeff Lynne's ELO & 10cc leading light has added two bonus trax to the original release in "Say The Word" (found on Iain's 2017 album "The Game Begins With The Lights Out") and "Drop Me Out, Wake Me Up" (a reworking of "Wake Me Up, Drop Me Out"). Iain will be touring the UK with Graham Gouldman and 10cc during March, April, September & October 2022.
Signed copies are available @ £15 from Iain via this link with unsigned copies priced @ £12 via the official 10cc store
Details of 10cc's 2022 UK tour dates/venues/tickets can be found here: ticketline.co.uk/10cc#bio
Related KJS/ELOBF articles
Review: Fly Away Home (Iain Hornal)
Unsung ELO: Jo Webb
Review: The Game Begins With The Lights Out (Hornal)
Caught Live: 10cc + Iain Hornal @ Birmingham 12/04/17
Caught Live: The Feeling + Iain Hornal
ELO Beatles Forever (ELOBF) recommends "Fly Away Home" by Iain Hornal to those enlightened folks who enjoy the music of Jeff Lynne's ELO, Roy Wood, Wizzard, The Move, 10cc, The Idle Race, 'Brum Beat', The Beatles and related artistes.
*** Until next "Time" in the ELOBF Universe ... KJS ... 06-Nov-2021 ***
Posted by Keith J Sinclair at 10:00 3 comments: 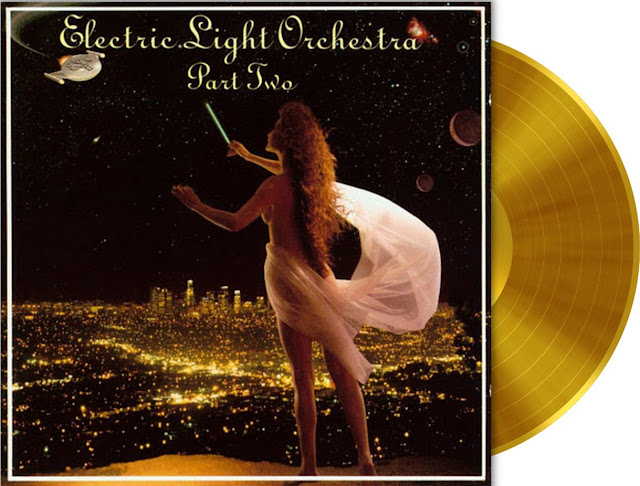 #1,629: Releases from Renaissance Records have been coming thick and fast this year when it comes to ELO Part II and The Orchestra (former members of ELo & ELO Part II) with the reissue of three albums already and another now due next year thanx to Electric Light Orchestra Part Two seeing a further vinyl release in limited edition 150g transparent gold vinyl.
Aside from the coloured vinyl, what's different about the new 2022 edition versus the 2021 gatefold issue is the inclusion of "Love For Sale" (penned by Bev Bevan & Pete Haycock and originally the 'B' side of the "Honest Men" UK/EU single) as a bonus track at the end of side one. Just 500 copies will be pressed making this another attractive purchase for collectors of ELO related vinyl. Release date is Wednesday 23rd March. Pre-orders can be placed at $25.99 (plus P+P) via this link thus:
renaissancerecordsus.com/electric-light-orchestra-part-ii-electric-light-orchestra-part-ii-limited-edition-150g-transparent-gold-variant/
Related KJS/ELOBF articles
ELO Part II: Renaissance Reissues Update
Vinyl Renaissance for ELO Part II Albums
Recommended: Anthology (Electric Light Orchestra Part II & The Orchestra)
ELO Beatles Forever (ELOBF) recommends Electric Light Orchestra Part Two (Gold Vinyl) to those enlightened folks who enjoy the music of ELO/Jeff Lynne, Roy Wood, The Move, 'Brum Beat', The Beatles and related artistes.
Until next "Time" in the ELOBF Universe ... KJS ... 04-Nov-2021
Posted by Keith J Sinclair at 12:00 1 comment: 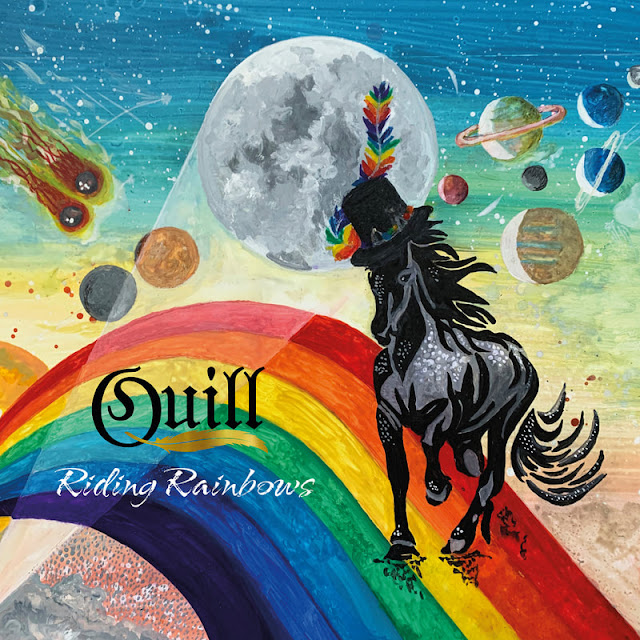 #1,628: Whilst it's been a quiet year for Jeff Lynne and Roy Wood, the same cannot be said for Joy Strachan-Brain, Quill and Bev Bevan as they have used the time to meticulously prepare their latest studio album "Riding Rainbows" some six years on from previous outing "Brush With The Moon". So when The Move and ELO co-founder says that "this is the best album I have played on since ELO's Out Of The Blue" then fans and followers are being given good advice to check it out for themselves as they would doubtless be impressed with this twelve song opus by Quill with a little help from an inspired roster of guest contributors including Andy Fairweather Low, Nick Pentelow (Wizzard), John Lodge (The Moody Blues), Chris Norman (Smokie), Tony Martin (Black Sabbath), Louis Clark Jr. (The Orchestra) and Richard Bailey (Magnum). Make no mitsake about it, this is a very different recording than its predecessor taking the band to a new level.
"a fine album worthy of chart implications and many a collection"
"Riding Rainbows" is an album reflective of Quill's renowned energetic and polished live performances with ten songs a collaborative effort between Bev, Joy and guitarist Lee Evans (who also wrote "Bullet Proof" and "Begin Again") and finds the septet in great form, whatever their choice of musical mood is. The sublime vocals of Joy Strachan-Brain again demonstrate an amazing versatility (whether solo or in duet) and the articulate arrangements by Louis Clark Jr. (courtesy The Maverick Strings) are sure to please fans of the classic ELO sound throughout. Whether it be the frenetic "Begin Again", the pensive "Coat of Colours" and "All You've Left Me Is Alone", the anthemic and completely brilliant opener "Riding Rainbows", the jazzy "Chinese Whispers", the classy "Love On The Run", the bluesy "Dead Man Walking", the skiffle of "Scratchin' At My Door" or the hard rock of "We're Only Human", there's more than enough on offer here to please purveyors of the long and varied career of Bev Bevan and engage new listeners in the wonderful Midlands enigma that is Quill.
"Riding Rainbows" is a fine album worthy of chart implications and many a collection, excellently produced by Alan Caves and confirming the aforementioned opinion of Mr. Bevan. Truly a pleasure to listen to, review and recommend. Quill have come of age in Yours Truly 2021. Bring on the vinyl edition! Fave trax: "Riding Rainbows", "Chinese Whispers", "Dead Man Walking", "Begin Again". ★★★★★ 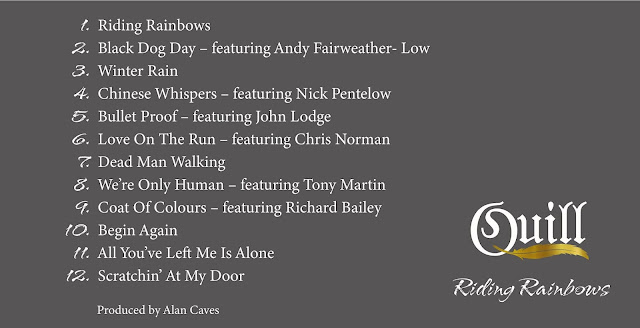