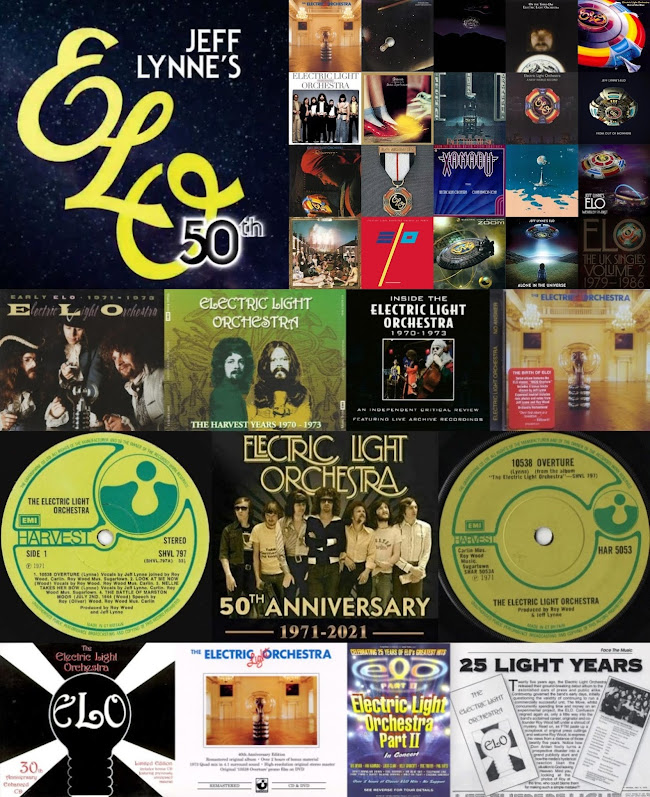 #1,619: Allowing for the fact that ELO technically began in the studio circa July 1970 with the core founding trio of Roy Wood, Jeff Lynne and Bev Bevan plus the fact that their first single wasn't issued until 1972, the year 2021 has been widely acknowledged as being the 50th anniversary of the Electric Light Orchestra with multiple social media posts citing #ELO50 and Yours Truly KJS publishing two ELOBF articles (see below) in anticipation of big things during the first quarter of this year. Yet, as we approach the fourth quarter of 2021, what has transpired is that very little has been forthcoming from Team Jeff and Sony's NYC marketing operation to mark such a significant birthday for one of the worlds most celebrated bands save the odd fan recollection, some new merchandise and an octet of Japanese BSCD2 reissues.
Many other bands/brands make a big deal of celebrating such a significant achievement yet all seems very quiet on the ELO front. Whereas it may be that these words are perchance a little premature when considering that The Electric Light Orchestra (ELO's debut LP) was released by Harvest (SHVL797) in the UK on Friday 3rd December 1971 and its 50th birthday is still a couple of months away but the general chatter amongst fans and in certain social media groups indicates a growing level of disappointment at the missing of such a golden opportunity if not the scoring of a massive own goal.
This is particuarly pertinent when considering that ELO's 30th anniversary saw many expanded and remastered releases back in 2001 and specific album reissues have been released or planned to be released, examples being a withdrawn Secret Messages in 2013 (replete with Beatles Forever) marking its 30th birthday and, of course, Out Of The Blue in 2017 marking its 40th anniversary. The list goes on.
It may well be that ELO maestro Jeff Lynne is now enjoying retirement and is quite settled in his new Brentwood home or that Bungalow Palace is still being transferred or perhaps a new album and ensuing 2022 tour is planned which will belatedly celebrate ELO's five decades but for the sake of the loyal fans who have stuck around and the new generation of admirers who came on board post Hyde Park, surely the least that Sony (be it Legacy, Columbia or RCA), Craig Fruin and Jeff Lynne's ELO can do is put some effort in before year end. KJS@ELOBF
Related KJS/ELOBF articles
#ELO50: 50th Anniversary Thoughts
#ELO50: Electric Light Expectations
#ELO50: 50th Anniversary Limited Edition Japanese BSCD2 Reissues
Join the ELO Beatles Forever Mailing List!
*** Until next "Time" in the ELOBF universe ... KJS ... 25-Sep-2021 ***
Posted by Keith J Sinclair at 14:51