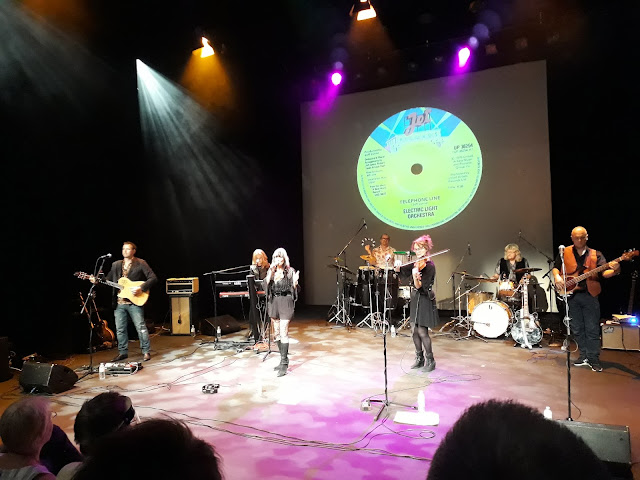 #1,614: For both artistes and patrons, it's been an awful long time since regular gigging and you might expect a certain amount of rustiness in returning to both stage and seats but judging by the performance of Quill at The Walker Theatre in Shrewsbury on Thursday night (9th September) the time has been redeemed wisely by Joy Strachan-Brain and her merry band as they edge closer to a 50th anniversary, the release of their much anticipated new studio album "Riding Rainbows" and a busier touring schedule.
Judging by the twenty (20) song set, the septet who are Quill in 2021 have truly upped their game as they broaden their musical bandwidth to reach a wider audience with the aforementioned "Riding Rainbows" complementing an energetic and thrilling live show which not only showcases ten of the new album trax but also references their unique legacy and present membership. There's a nice balance in the songs presented wherein Bev Bevan's stellar career with The Move, ELO and Black Sabbath is perfectly nestled in with Quill's own original material thanx not only the the immense vocal talents of Joy Strachan-Brain (surely one of our best singers), Abby Brant (impeccable keyboards as usual), Lee Evans (top notch guitarist replete with amazing solos) and John Jowitt (sublime bass playing) but also the familiar high class violin antics of Kate McWilliam and world class percussion skills of Andy Edwards in rotation (literally) with Bev.
Quill are truly a unit who ply their trade sometimes in Americana, sometimes in folk and now in temptestuous rock. They really should be playing on a much larger stage as this polished, professional display highlighted. If they don't get your pulse racing and fingers tapping with original songs such as "Scratchin' At My Door" and "Riding Rainbows" then their all action interpretation of "I Can Hear The Grass Grow" and "California Man" let alone a mindblowing version of "Heaven & Hell" surely will. The pensive "Winter Rain" (with a nice dedication to Bev's lifelong friend Phil Ackrill) also stood out during this hugely enjoyable concert. With a new album, new shows and a new raw cutting edge, you should consider Quill - whether it be on disc and/or on stage.
Quill performed: Grey Goose Call ~ Chinese Whispers ~ Telephone Line (ELO) ~ Winter Rain ~ Scratchin' At My Door ~ Coat Of Colours ~ Dead Man Walking ~ I Can Hear The Grass Grow (The Move) ~ Riding Rainbows ~ Black Dog Day ~ Say It Ain't So ~ Can't Find My Way Home (Steve Winwood) ~ Begin Again ~ Kate's Jig ~ Bullet Proof ~ California Man (The Move) ~ Love On The Run ~ Heaven & Hell (Black Sabbath) ~ Blackberry Way (The Move) ~ Don't Bring Me Down (ELO)
Quill are: Joy Strachan-Brain (Lead vox) ~ Bev Bevan (Percussion/drums) ~ Kate McWilliam (Violin/vox) ~ Abby Brant (Keys/vox) ~ Lee T. Evans (Guitars/vox) ~ John Jowitt (Bass/vox) ~ Andy Edwards (Drums/Percussion/guitar) 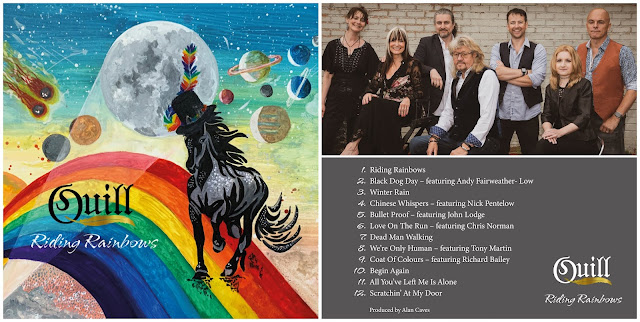