Charting the Rise of ELO in the UK & America: The Singles 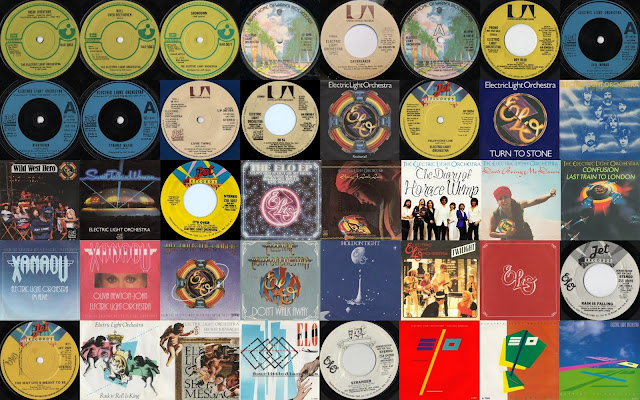 #1,601: Previous KJS/ELOBF article: "Charting the Rise of ELO in the UK & America: The Albums" looked at the chart performance of the Electric Light Orchestra (ELO) on both sides of the Atlantic has prompted several requests from ELOBF followers and ELO fans alike for a follow-up overview of the 7" singles released by the band here in the UK and "Across The Border" (so to speak) in the US - so here it is!
If you didn't already know it, ELO are noted as the only band in US chart history with the most (twenty) Billboard Hot 100 Top 40 hits without achieving a number one single - ever. Truly an amazing record. If we also consider their record of twenty seven (27) UK Top 40 singles, we can see a similar pattern as that with their album career in that (a) initial UK success was followed by a lull before an astonishing run of hit singles (driving so many ELO greatest hits compilations hence: "Another Chart Breaks: ELO's UK & US Compilations Ranked") and (b) heavy US touring schedules and successful albums created a popularity (ahead of that in their home country) which delivered an impressive 25 Hot 100 singles despite a notable fading away like The Beatles on Hey Jude in the 80's. Note that there were quite a few 7" releases unique to each territory such as "Do Ya" and "It's Over" in the US or "Rockaria!" and "Wild West Hero" in the UK. It's also interesting that ELO's ever popular signature song "Mr. Blue Sky" peaked at a modest #35 in the States whilst "Calling America" (US:#18; UK:#28) fared better than "Rock 'n' Roll Is King" (US: #19; UK #13). If nothing else, the tabulation below shows just how big the ELO commercial juggernaut was.
Related KJS/ELOBF articles
Charting the Rise of ELO in the UK & America: The Albums
Another Chart Breaks: ELO's UK & US Compilations Ranked
ELO UK Single Releases   ELO UK Album Release Dates   ELO Family Tree
Another Chart Breaks: Early ELO in the UK & US
ELO Beatles Forever Mailing List
*** Until next "Time" in the ELOBF universe ... 10-July-2021 ***
Posted by Keith J Sinclair at 00:45