Charting the Rise of ELO in the UK & America: The Albums 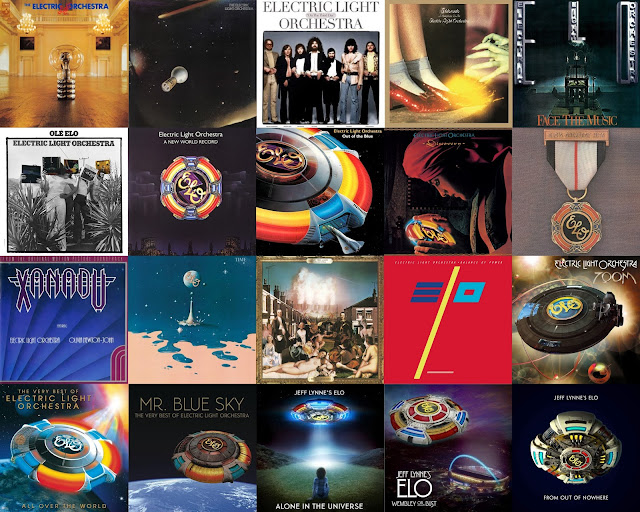 #1,600: For a long time, Yours Truly KJS has wanted to put together a graphic that depicts the album chart career of the Electric Light Orchestra (ELO) both here in the UK and across the pond in the United States in one tabulation for the perusal of ELO fans, both avid and casual, hence this article! You'll find below the peak chart positions of every album that has appeared BOTH in the UK Official Albums Chart Top 100 and the US Billboard 200 with the exception of "On The Third Day", "Eldorado", "Face The Music" and "Olé ELO", four albums that never charted in the UK and discussed in the 2017 ELOBF article: "Chart Tragedy: ELO's UK Album Chart Famine".
If nothing else, the chart below tells the story of ELO in both countries within the same timeline as the band initially enjoyed greater success in the UK before their extensive "Do It With The Light On" US tours yielded increasingly higher chart placings whilst the aforementioned quartet of albums did not chart back home. Note how ELO's commercial breakthrough "Down Home Town" in Britain came with "A New World Record" beginning a run of eight Top 10 albums ending with "Balance Of Power" and recommencing after "Zoom" up until the present day. Note also that over in the States, ELO haven't enjoyed a Top 20 placing since 1981's "Time" showing that their appeal in the UK (in terms of chart position rather than actual sales) has largely remained since their heyday whilst their popularity has receded somewhat in America (thanx to major generational changes in the market) although ELO still retain a sizeable loyal following who ensure chart impact.
A similar story can be extracted by comparing the chart placings of ELO singles in the UK & US. Expect a KJS/ELOBF article on that subject soon too. In the meantime, this writer hopes that you have enjoyed reading this, our 1,600th article ... and some of the previous ones!
Related KJS/ELOBF articles
Charting the Rise of ELO in the UK & America: The Singles
Another Chart Breaks: ELO's UK & US Compilations Ranked
ELO UK Single Releases   ELO UK Album Release Dates
Chart Tragedy: ELO's UK Album Chart Famine   ELO Family Tree
Another Chart Breaks: Early ELO in the UK & US
ELO Beatles Forever Mailing List
*** Until next "Time" in the ELOBF universe ... 07-July-2021 ***
Posted by Keith J Sinclair at 08:00