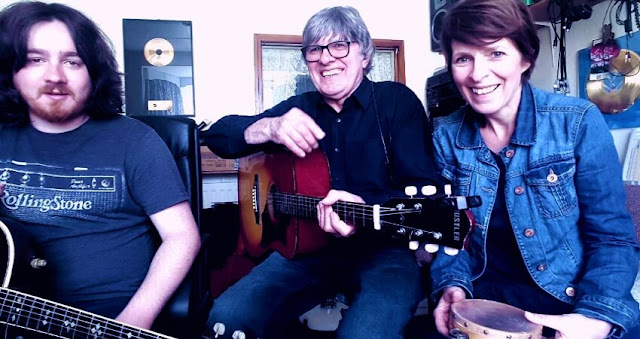 #1,604: Former ELO member Dave Scott-Morgan will bring a streamlined Morganisation to the Kitchen Garden Cafe venue in King's Heath, Birmingham at 8PM (doors open at 7PM) on Thursday 12th August  for what promises to be a rather special gig with wife Mandy and guitarist Alex Lowe also sharing the stage. Yours Truly KJS caught up briefly with Dave (who also cites spells with The Uglys, Balls and Magnum in his musical CV) recently and asked him three quickfire questions for ELOBF about the forthcoming show:
KJS: Morganisation are back with a bang! What have you been up to recently?
DSM: Hi Keith! It's good to be back! Since the Earthrise gig at Birmingham Conservatoire, I've been doing a lot in the studio.
KJS: Will your date at the Kitchen Garden Cafe feature the full band or should we expect something a little more intimate?
DSM: The show will be the three piece group with Mandy and Alex. I've re-Morganised us into a trio!
KJS: Your set lists often include a mix of your own songs, inventive covers and some ELO. Will we hear some new songs?
DSM: Yes! All I will say is that there'll be a bunch of new songs in the set, some being from our latest albums "Seven" and "Made In Britain".
Press Release: "Refreshed and Re-Morganised post lockdown, Dave Scott-Morgan and his group are with us once more, mixing their unique brand of originals with rock ‘n’ roll classics and quintessent ELO hits. Dave, local hit songwriter and former musician with Birmingham’s own Electric Light Orchestra, with his group Morganisation, will be airing along with your favourites, tracks from their Lockdown album Made in Britain. The byword is elegant harmonic fun plus some nostalgic anecdotes too! Come prepared to tap your toes."
Remaining tickets for the aforementioned Morganisation gig at the Kitchen Garden Cafe will be priced at £12 on the door or can be purchased in advance for £10 (plus £1 booking fee) via this link thus: wegottickets.com/event/514646
Related KJS/ELOBF articles
Caught Live (3): Morganisation @ The Oak 11/10/18
Caught Live (2): Morganisation @ The Artrix 23/09/16
Caught Live: Morganisation @ The Old Joint Stock 13/09/15
ELO Beatles Forever Mailing List
ELO Beatles Forever (ELOBF) recommends Dave Scott-Morgan and Morganisation to those enlightened folks who enjoy the music of ELO/Jeff Lynne, Roy Wood, The Move, The Idle Race, 'Brum Beat', The Beatles and related artistes.
*** Until next "Time" in the ELOBF universe ... KJS ... 18-July-2021 ***
Posted by Keith J Sinclair at 01:01