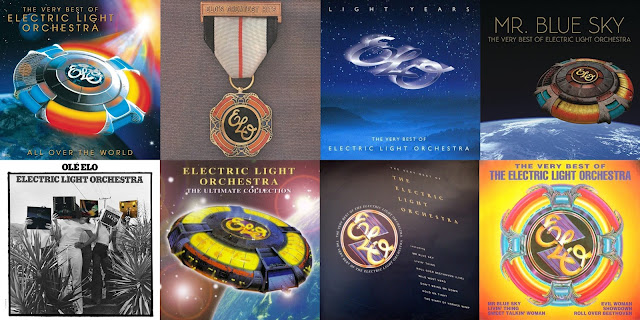 #1,599: When it coms to compilations, reissues and the repackaging of their impressive back catalogue, the Electric Light Orchestra (ELO) have always been up there with the likes of The Beatles, Elvis Presley and many other music legends. Whether it's the plethora of EMI Harvest Heritage releases of their early years here in their home country or the many career overviews of their worldwide roster of hit singles (replete with the odd album track in some cases), there's an almost innumerable amount of ELO compilations literally "All Over The World" hence Yours Truly KJS thought that it would be good idea to rank the performance and popularity of the Greatest Hits and 'Very Best Of' compilations that have entered the Official Albums Chart UK Top 100 in the UK and/or the Billboard 200 over in the States.

At the time of writing, seven ELO compilations have charted in the UK with four making the Top 10. ELO's debut "Greatest Hits" (JETLX525) in late '79 peaked at a relatively modest #7 in the wake of the success of "Discovery" (JETLX500) partly due to the fact that none of the hit singles from said album were included. Note that each decade since is represented in the above table! It's therefore no surprise that the bestselling "All Over The World" tops the rankings whilst it remains impressive that Dino's VBO set managed a healthy #4 in 1994 thanx to a fruitful TV ad campaign not forgetting that "Mr. Blue Sky" (Jeff Lynne's 2012 re-recordings mostly of ELO's hits for Frontiers) made #8.

It's a slightly different story in the United States with just the four ELO compilations making the Billboard 200 to date with none breaching the upper reaches of the chart. "ELO's Greatest Hits" tops this list after making #30 in 1979 just ahead of "Olé ELO", their first successful hits collection peaking at #32 in 1976 thanx primarily to their success in breaking America before hitting the commercial big time "Down Home Town" and elsewhere. Conversely, "All Over The World" and "Mr. Blue Sky" - their more recent releases since the turn of the century - bring up the proverbial rear outside the Top 100 at #115 & #118 in complete contrast to their chart success over in the UK.
Look out for a forthcoming KJS/ELOBF article which will look at specific UK non-charting ELO compilations!
Related KJS/ELOBF articles
Compilation Corner: The Very Best of ELO (Dino)
Compilation Corner: ELO Part II
Compilation Corner: The Best Of ELO (Tellydisc)
Compilation Corner: Ticket To The Moon
Compilation Corner: ELO's Greatest Hits Volume Two
Olé ELO: Saluting ELO's First Successful Compilation
ELO Beatles Forever Mailing List
*** Until next "Time" in the ELOBF universe ... 03-July-2021 ***
Posted by Keith J Sinclair at 01:01