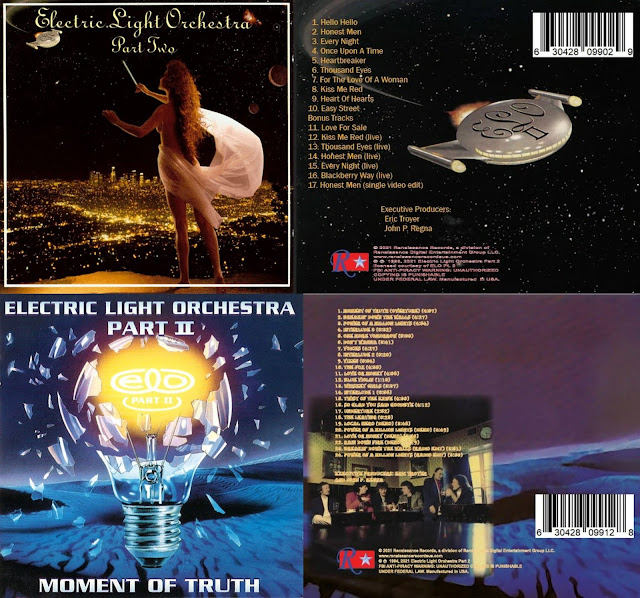 #1,598: Further to the previous KJS/ELOBF article entitled "Vinyl Renaissance for ELO Part II Albums" back on Monday 22nd February concerning the forthcoming vinyl (and CD) reissues of the ELO Part II studio albums "Electric Light Orchestra Part Two" and "Moment of Truth" via US based Renaissance Records, Yours Truly KJS can now confirm that both expanded/remastered albums are now available to order in CD format with the vinyl editions due out on Monday 27th September and Monday 11th October respectively, at the time of writing.
"Electric Light Orchestra Part Two" replicates the original 1991 album with 10 songs whereas the expanded and remastered 30th anniversary CD includes seven additional trax including "Love For Sale" (sure to please fans and family of Pete Haycock), the single edit of "Honest Men" and five live recordings amongst which is "Blackberry Way" making a welcome connection with Roy Wood and Electric Light Orchestra progenitors The Move. Pricing: $16.99 (CD) and/or $24.99 (1LP) plus shipping.
The 2021 issue of "Moment of Truth" sees both the new CD and 2LP expanded and remastered editions supplant the original 18 songs from the 1994 album with six additional trax featuring the radio edits of "Power Of A Million Lights" and "Breakin' Down The Walls" plus four demos including the previously unreleased "Local Hero" and "Rain Down Fire". The vinyl debut of "Moment of Truth" is welcome and long overdue, especially as a double album. Pricing: $16.99 (CD) and/or $37.99 (2LP) plus shipping.
www.renaissancerecordsus.com
Pre-order Electric Light Orchestra Part Two (1GLP) here
Order Electric Light Orchestra Part Two (CD) here
Pre-order Moment of Truth (2LP) here
Order Moment of Truth (CD) here
Order Kelly Groucutt's "Kelly" (CD) here
STOP PRESS: Use Promo Code FREEDOM15 for 15% saving until 7th July!
elobeatlesforever (elobf) recommends "Electric Light Orchestra Part Two" (CD/1GLP) and "Moment of Truth" (CD/2LP) by ELO Part II released by Renaissance Records to those enlightened folks who enjoy the music of Jeff Lynne, ELO, Roy Wood, The Move, The Idle Race, 'Brum Beat', The Beatles and related artistes.
*** Until next "Time" in the ELOBF universe ... 28-June-2021 ***
Posted by Keith J Sinclair at 08:00 3 comments: 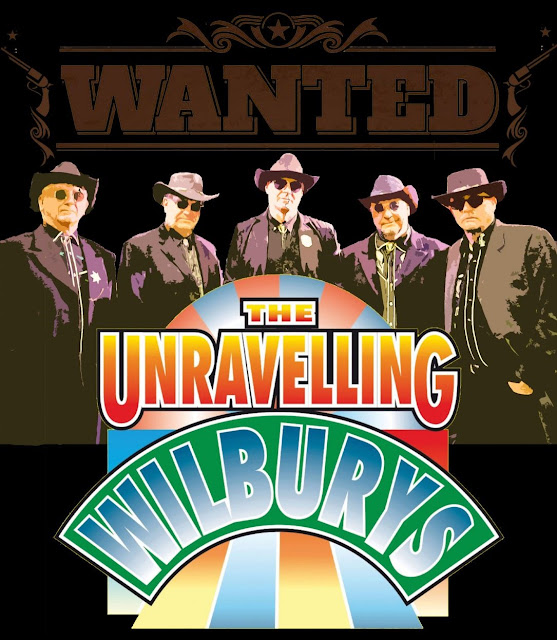 #1,597: Yours Truly KJS/ELOBF are pleased to bring your attention to a relatively new addition to The Traveling Wilburys tribute band roster who are The Unravelling Wilburys! This eclectic quintet will soon be playing a series of dates across the UK including a much anticipated visit to the nearby Robin 2 in Bilston. Here's an overview of the band (quoted from their official website) thus:
"The Unravelling Wilburys are a bunch of good ol’ boys who turn their skills to replicating the sound and songs of the late 80s super-group The Traveling Wilburys, where five of the greatest names in rock music history, George Harrison, Roy Orbison, Tom Petty, Bob Dylan and Jeff Lynne, came together and recorded two Wilburys albums, Volume One and Volume Three. The Unravelling Wilburys are Thumper, Blind Melon, Sticky Willy, Walter and Honky Tonk, who in a former guise as top Beatles project, Sgt. Pepper’s Only Dart Board Band, (The Flab Five), toured for over 20 years playing at UK festivals, including Glastonbury, and at theatres and music venues across Europe and the UK. They also headlined at a Beatles festival at Montgomery, Alabama. Their tongue-in-cheek shows feature the boys take on their songs being (allegedly) usurped by The Traveling Wilburys back in the late 1980's at Nashville, Tennessee. The Unravelling Wilburys now “steal back what is rightfully theirs” and also ‘borrow’ some choice solo songs from Messrs Dylan, Lynne, Orbison, Harrison and Petty. Showcasing their amazing musical talents, the set list features Wilbury songs such as End of The Line, Handle With Care, The Devil’s Been Busy, Tweeter And The Monkey Man, She’s My Baby, and Heading For The Light, together with classics such as Pretty Woman (Roy Orbison), Mr. Blue Sky (Jeff Lynne), Running Down A Dream (Tom Petty), Mr. Tambourine Man (Bob Dylan) and Here Comes The Sun (George Harrison). With all these great songs in the country & rock genres and plenty of humour throughout, this is a show not to be missed!"
Check out The Unravelling Wilburys performing "End Of The Line" >>>here<<<
For more info and Gig Guide go to: www.unravellingwilburys.co.uk
ELO Beatles Forever (ELOBF) recommends The Unravelling Wilburys to those enlightened folks who enjoy the music of ELO/Jeff Lynne, Roy Wood, The Move, The Idle Race, 'Brum Beat', The Beatles and related artistes.
Until next "Time" in the ELOBF universe ... KJS ... 25-June-2021
Posted by Keith J Sinclair at 07:00 2 comments:

Electric Light Orchestra: Out of the Blue in 2CD Mode

#1,596: ELO fans of old lovingly remember buying their copies of "Out Of The Blue" in all of its double album glory replete with poster and cut-out spaceship. Whether it was the original Jet/UA issue (#UAR100) or the ensuing Jet/CBS (some in blue vinyl) issue (#JETDP400) or the later Epic reissue (#4508851), OOTB is recognized by many as a two disc set until the advent of the compact disc saw it compressed onto the familiar single disc releases (Epic #4508852, Epic #MILLEN3, Legacy #88697053232 et al) that many fans are familiar with today. 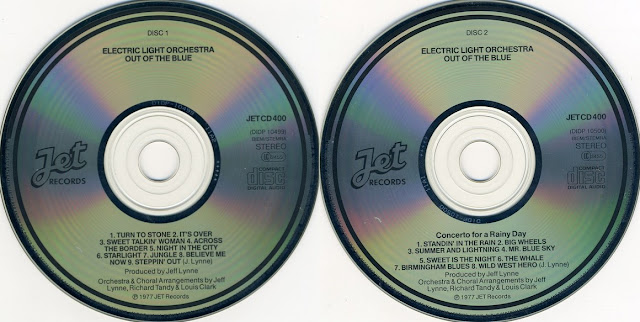 However, there is an exception to the above overview in that early Dutch CD issues (circa 1986-87) of the Jeff Lynne penned Electric Light Orchestra seminal classic (originally released in October 1977) were released as a 2CD set (surprisingly) under the Jet label (CDJET400 /JETCD400) in what is still commonly referred to as a Fatbox case. Completist collectors doubtless already possess this rather rare edition with copies still doing the rounds on eBay and/or Discogs starting from £50 upwards at the time of writing! 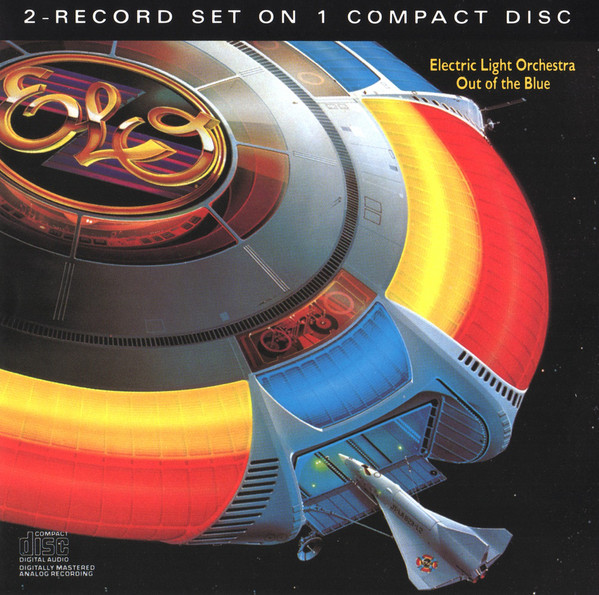 An advantage surely of owning the 2CD set was that you could play "Concerto For A Rainy Day" by playing the second disc rather than fiddling around for track #10 on the 1CD version! It's also interesting to note that early pressings of the single disc issue (see above) made a point of stating it was a "2-RECORD SET ON 1 COMPACT DISC". In any case, those currently in possession a 2CD copy of "Out Of The Blue" are definitely sitting on a wise investment in Yours Truly 2021! "Do Ya" own a copy?
Until next "Time" in the ELOBF universe ... KJS ... 22-June-2021
Posted by Keith J Sinclair at 11:00 9 comments: 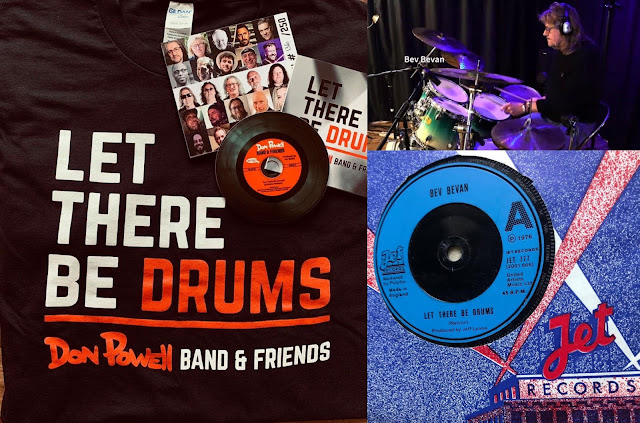 #1,595: Legendary Slade drummer Don Powell (and his band) have teamed up with a whole host of other legendary drummists including our very own Bev Bevan (The Move, ELO, Black Sabbath, Quill), Brian Bennett (The Shadows) and Andy Edwards (Quill) to record a charity single cover of Sandy Nelson's instrumental classic "Let There Be Drums" (UK #3; January 1962) to raise funds for #WeMakeEvents in aid of the many musicians struggling to make ends meet during the current plandemic. Many Electric Light Orchestra (ELO) fans and collectors will recall that Bev also released "Let There Be Drums" b/w "Heavy Head" (Jet/Polydor #JET777) as his debut single in 1976.
See also: JET777: Bev Bevan's Heavy Headliner
This new version is officially released on Friday 18th June and can be purchased from all popular download and streaming services with a limited edition batch of 250 CD singles containing three trax priced at £8.80 each also available to order via this link thus:
donpowellband.company.site/Let-There-Be-Drums-Ltd-Edition-3-x-track-CD-p365782951
amazon.co.uk/Blundell-Meadows-Edwards-Morrison-McKenzie/dp/B0966HHGYX
amazon.com/Blundell-Meadows-Edwards-Morrison-McKenzie/dp/B0966FDY1F
ELO Beatles Forever (ELOBF) recommends "Let There Be Drums" by The Don Powell Band & Friends to those enlightened folks who enjoy the music of ELO/Jeff Lynne, Roy Wood, The Move, The Idle Race, 'Brum Beat', The Beatles and related artistes.
Until next "Time" in the ELOBF universe ... KJS ... 18-June-2021
Posted by Keith J Sinclair at 13:01 1 comment:

Recommended: City On The Plain (Morganisation) 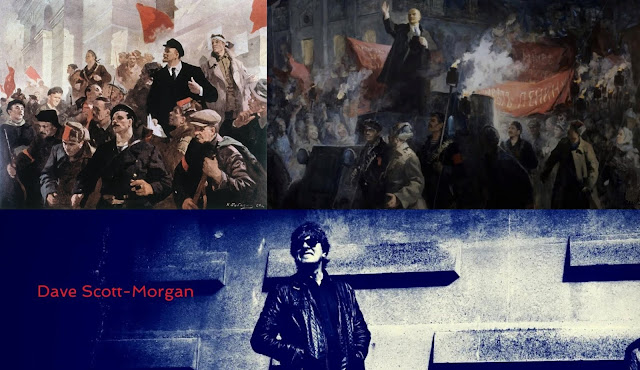 #1,594: With anevocative new music video invoking fond memories of the ELO Part II gigs with the Moscow Symphony Orchestra in 1991, Yours Truly KJS and ELO Beatles Forever (ELOBF) are of the opinion that fellow ELO fans will enjoy viewing and/or listening to "City On The Plain" - the new single from former Electric Light Orchestra (ELO) member Dave Scott-Morgan and Morganisation - just released on Friday 11th June. In Dave's own words it's an "anti-woke satire for the ides of twenty-one ... The cover painting of Vladimir Lenin on The First Day Of Soviet Power in 1917, is by Nikolai Lukich Babasyuk. The song title is culled from the Book of Genesis chapter 13 verse 12: Abram dwelled in the land of Canaan, and Lot dwelled in the cities of the plain, and pitched his tent toward Sodom."
amazon.co.uk/City-Plain-Morganisation/dp/B096BK6BB6
amazon.com/City-on-the-Plain/dp/B096BFMK1V
For more info on Morganisation go to: mandy016.wixsite.com/morganisation
For more info on Dave Scott-Morgan go to: davescottmorgan.com 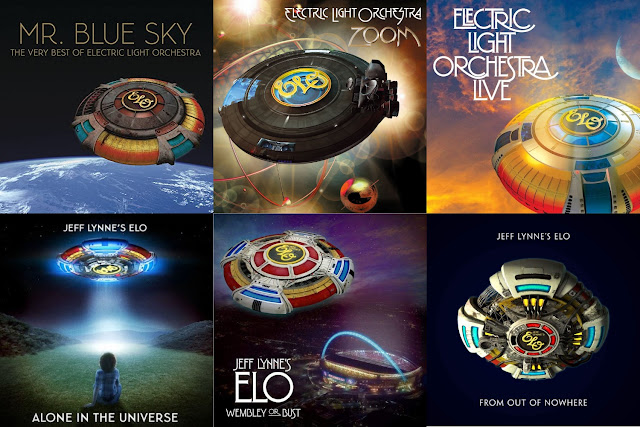 #1,592: With over 3 million views since February 2009, Yours Truly KJS and ELO Beatles Forever (ELOBF) have built up a solid reputation in not only covering all things ELO, Jeff Lynne, Roy Wood, Bev Bevan, related and indie artistes but also a whole host more aside from continuing our campaign for the official release of "Beatles Forever" from the originally intended 1983 "Secret Messages" 2LP set.
With that in mind, if you'd like to start receiving email notifications of new KJS/ELOBF articles, please consider joining the Official ELOBF Mailing List by dropping a line to sinclair.keith@talk21.com should you be so minded. Many thanx in advance for your interest!
Related KJS/ELOBF articles
Elsewhere with ELOBF   Follow Me Follow ELOBF?
*** Until next "Time" in the ELOBF universe ... 01-June-2021 ***
Posted by Keith J Sinclair at 23:00 1 comment: