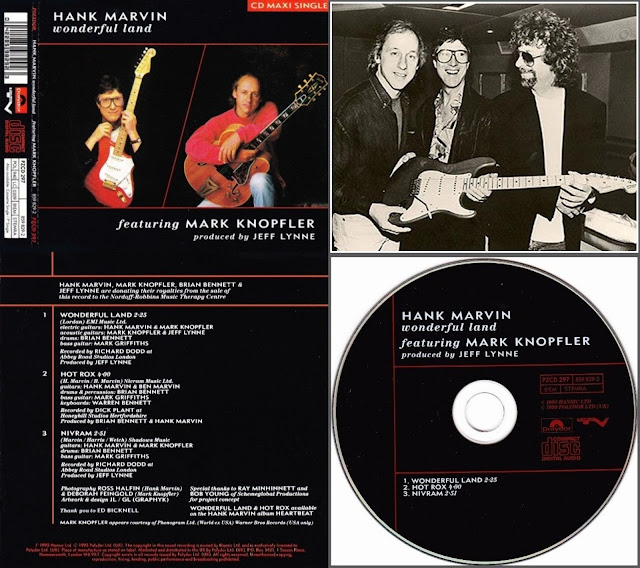 #1,587: Jeff Lynne's association with The Nordoff-Robbins Music Therapy Centre goes back much further than their nomination for the Electric Light Orchestra (ELO) frontman to receive an O2 Silver Clef Award back in 2016 due to his 1993 collaboration with The Shadows legend Hank Marvin and Dire Straits' guitar maestro Mark Knopfler in aid of the aforementioned charity.
Having worked with a plethora of his personal musical heroes in the eighties and early nineties as the ELO spaceship was retired in 1986, Jeff was called into Abbey Road Studios to produce (and contribute acoustic guitar to) a new version of "Wonderful Land" (UK #1 in 1962 for eight weeks from March to May) for Hank Marvin's "Heartbeat" album which was, of course, also released as a single in 7", CD (now worth a small fortune) and cassette formats with flip side "Nivram" - also produced by Lynne. His then regular engineering cohort Richard Dodd was also on hand for the session. "Wonderful Land" sadly failed to chart second time around but it did help "Heartbeat" to a healthy #17 in the Official UK Album Chart during December 1993. Aside from his earlier work with "Armchair Theatre" (1990), Miss B Haven (1990), Del Shannon (1991), Tom Petty (1991), "The Traveling Wilburys Volume 3" (1991) and Julianna Raye (1992), the final decade of the 20th century was to be equally busy if not prolific for Jeff Lynne in advance of the return of his new look ELO with "Flashback" (2000) and "Zoom" (2001). Look out for forthcoming KJS/ELOBF articles covering those partnerships and projects soon! 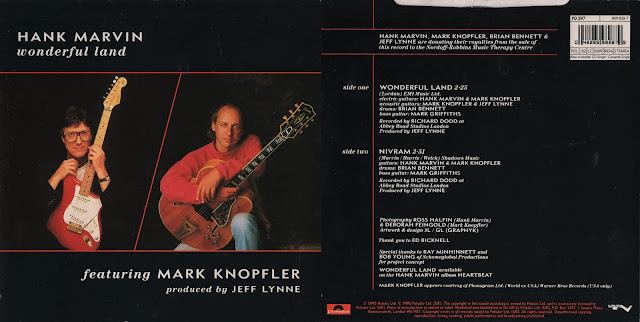 Nordoff-Robbins Music Therapy is the largest independent music therapy charity in the UK, dedicated to changing the lives of vulnerable and isolated people. They support thousands of people through their own centres and by working in partnership with a wide range of organisations including care homes, schools and hospitals. Music therapy is the specialist use of music that aims to facilitate physical and emotional well-being, and to promote the development and retention of key communication skills. A wide range of instruments can be used in music therapy, including the voice, and the music created is often improvised. Music therapists support people to develop their own ways of being musical in order to explore their potential and connect with the world around them. Donations can be made to the charity via this link thus: www.nordoff-robbins.org.uk/donate
Related KJS/ELOBF articles
One Way Love: When ELO Met ABBA
Del Shannon: The Jeff Lynne Connection
Livin' Twang: Duane Eddy with Jeff Lynne
Let It Shine A Little Love: Brian Wilson with Jeff Lynne
The Story of Jeff Lynne & The Everly Brothers
Dave Edmunds: Information, Riff Raff & Jeff Lynne
Jeff Lynne Songs: Poor Little Fool (Helen Reddy)
Silver Clef: Another Award for Jeff Lynne
Randy Newman: The Story of a Rock & Roll Band, ELO & Jeff Lynne
Nobody's Angel: Miss B Haven, Jeff Lynne & The Warwickshire Warblers
*** Until next "Time" in the ELOBF Universe ... 13-May-2021 ***
Posted by Keith J Sinclair at 07:18