#1,589: For a long time, Yours Truly KJS and ELO Beatles Forever (ELOBF) have been researching the UK release dates for all Electric Light Orchestra (ELO) singles from "10538 Overture" (Harvest #HAR5053) in 1972 to "Getting To The Point" (Epic #A7317) in 1986 and this article is the result of those investigations. Using information from the KJS/ELOBF archives and other reputable sources with a pinch of common sense and the odd memory cell, this writer hopes that you find this information of interest. Note that "Mr. Blue Sky" (Jet #UP36342) was issued in January! Would MBS have gone higher in the Top 10 if it had have been released during Spring/Summer '78?
There is a lot of conflicting data out there and even 'official' ELO sources sometimes get it wrong (i.e. "Telephone Line" was not released on Saturday 21st May 1977 as claimed recently via social media). Default release day was on a Friday (or w/e Friday, as cited below). No controversy is intended as we approach the 43rd anniversary of "Wild West Hero" (Jet #SJET109) this week. All comments and alternative date theories or propositions are welcome in this discussion. UK chart positions courtesy of Official Charts Company Archive. 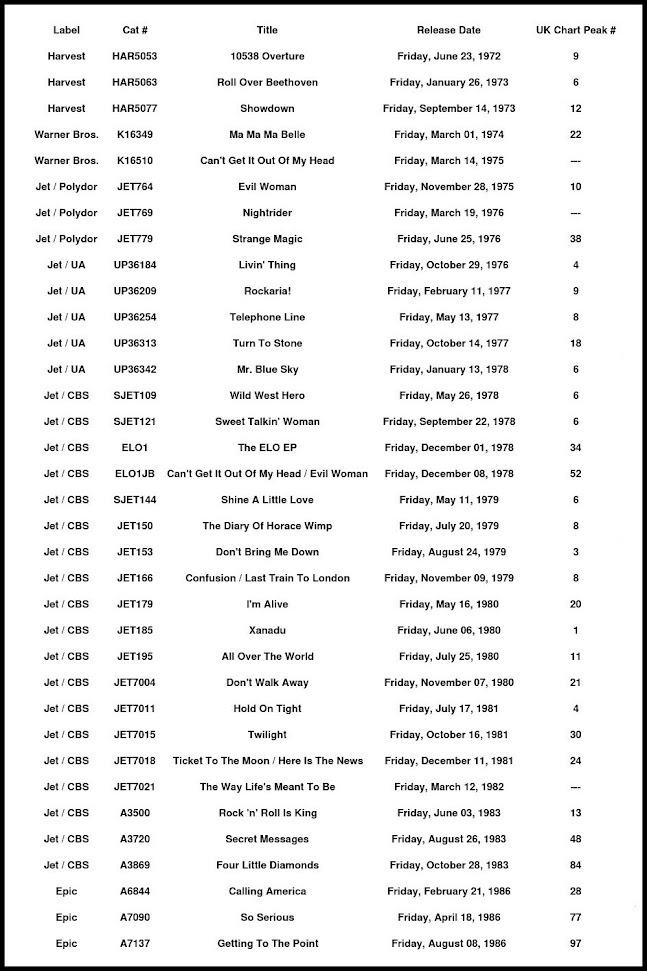 Related KJS/ELOBF articles
ELO Family Tree   ELO: The Singles That Got Away
After Vinyl: The Single Life of ELO
ELO: Eight Injection Moulded Singles
Vinyl Story: ELO's AA Side Singles Revisited
ELO: The UK Singles Volume Two 1979-1986
Recommended: ELO: The UK Singles Volume One 1972-1978
*** Until next "Time" in the ELOBF Universe ... 23-May-2021 ***
Posted by Keith J Sinclair at 01:00