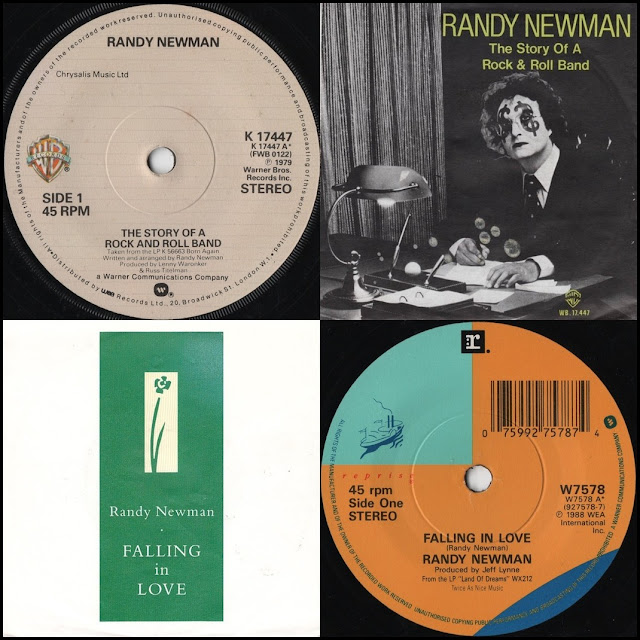 #1,584: Perhaps the ultimate compliment for an artiste/musician is to have a song written about you or a song quoting your songs and when it comes to the Electric Light Orchestra/Jeff Lynne there's now a growing list that includes Cheap Trick's "ELO Kiddies" (1977), Paul Melancon's "Jeff Lynne" (2002), Esa Linna's "She's Not A Human Being" (2013) and, of course, "ELO Forever" (2014) by Michael Laine Hildebrandt's Bubble Gum Orchestra (BGO) amongst not a few others in its ranks as well as a certain track crafted by American singer/songwriter Randy Newman for his album "Born Again" in 1979 just as ELO were approaching their commercial peak.
At the time of release, many thought that "The Story Of A Rock & Roll Band" (UK: Warner Bros. #K17447) was a parody of ELO and Jeff Lynne's trademark song arrangements and success in referencing, as it did, three of their hit singles ("Telephone Line", "Turn To Stone" & "Mr. Blue Sky") and hometown Birmingham. Yet this was far from what was intended by the writer on an album many listeners thought dark and critical of the music biz at that time. This was confirmed in a later interview when Newman affirmed: "What I like about it is that I got everything so wrong … I mispronounced the name of the town, made up their names. And they do have these idiosyncrasies about their music that are funny. It's maybe a kind of a joke, but I wouldn't have done it if I really hated them like I hate some people."

The fact that no offence was taken by Lynne or intended by Newman was confirmed when the two music legends collaborated during the recording sessions nine years later for "Land Of Dreams" (UK: Reprise #WX212) in 1988 when the ELO maestro not only produced "Falling In Love" (UK: Reprise #W7578) but also contributed keys, guitar, bass and backing vox (alongside Tom Petty and Mike Campbell) to the eventual single as well as backing vox for "It's Money That Matters". Note also that co-producer Mark Knopfler also contributed significantly on "Land of Dreams" and would come to work directly with Jeff and Hank Marvin three years later for the "Wonderful Land" charity single. This was a productive if not busy time for Jeff during the latter half of the decade as he worked alongside George Harrison, Roy Orbison, Tom Petty, Del Shannon, Miss B Haven, Brian Wilson and Duane Eddy aside from forming The Traveling Wilburys hence working with Randy Newman too must also have been a highlight.
One therefore wonders why there remains a reluctance to release "Beatles Forever" when taking into account songs such as "Titles" by Barclay James Harvest and "Something About The Beatles" by The Korgis which do great justice to their musical legacy in the same way as the aforementioned quintet of ELO friendly tunes (especially that of Randy Newman) do so for Jeff Lynne. 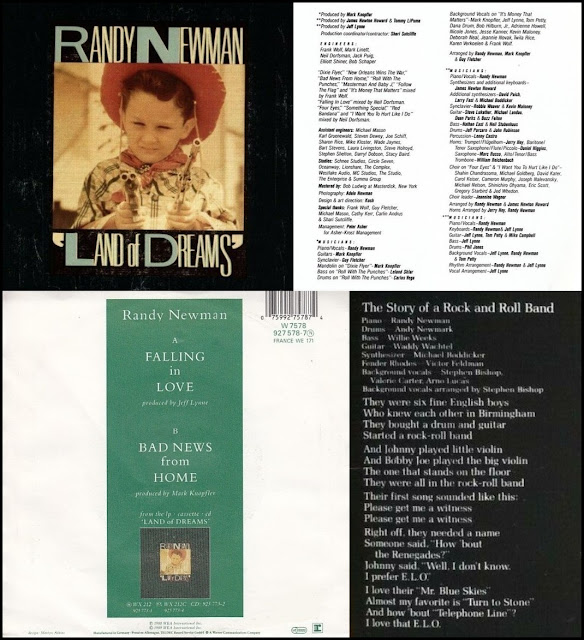 #1,583: Mention the name Del Shannon and many ELO fans will most likely think of his posthumous 1991 album "Rock On!" (UK: Silvertone Records #ORELP514) which was (of course) produced between Jeff Lynne and Mike Campbell with lead single "Walk Away" co-written by Del with Jeff and Tom Petty. Most of the album was already recorded before Del passed away in February 1990 but "Rock On!" was successful in not only bringing his name back into the limelight, it also introduced Del to a whole new generation of admirers particularly when taking into account the high probability that he would have officially joined the ranks of The Traveling Wilburys (who went on to record/release his worldwide #1 smash hit "Runaway" during the "Volume 3" sessions in tribute to Del) following the tragic death of Roy Orbison. Yet the connections between Del and Electric Light Orchestra maestro Jeff Lynne are even deeper than their shared birthdate of 30th December (Del was born in 1934 with Jeff following in 1947) not forgetting that Del is credited with backing vox for "Blown Away" on "Armchair Theatre" LP and that the 2001 expanded edition of ELO's "Discovery" album included a nice cover of "Little Town Flirt". 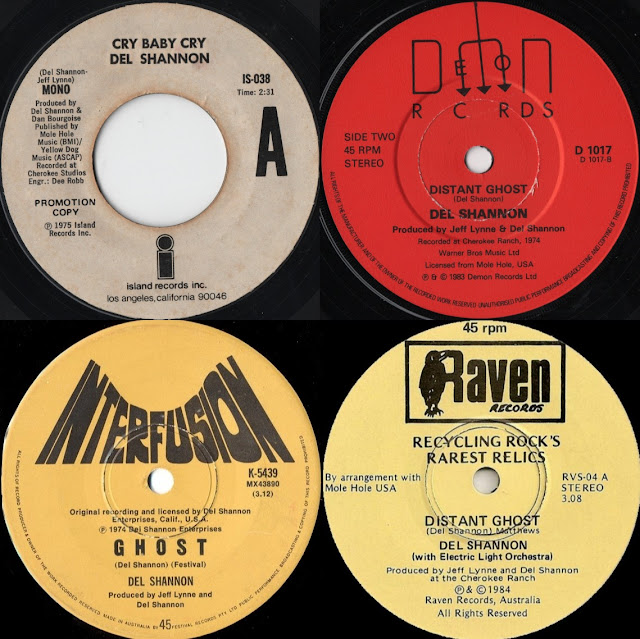 However, Del Shannon and Jeff Lynne had a working relationship going back as far back as the sessions at his Cherokee Ranch studio in the latter half of both 1973 and 1974 which produced a trio of songs known as The Dead Set ("Alive But I'm Dead"; "Deadly Game"; "Distant Ghost") plus a number of other songs that were either co-written by the two and/or initially involved the production skills of Jeff and at times the rhythm section of ELO. Of particular interest is the fruit of those sessions including the 1975  US single "Cry Baby Cry" (Island #IS-038) and "Ghost", the flip side to the 1974 Australian single "Oh, How Happy" (Interfusion #K-5439) which was reissued in 1984 as "Distant Ghost" (Raven Records #RVS-04) interestingly citing the artiste as Del Shannon (with Electric Light Orchestra). "Distant Ghost" was finally released in the UK as the flip side to the 1983 single "Cheap Love" (Demon Records #D1017). Might we also suggest that you have a listen to "Raylene" via YouTube? Most of the songs in question (in one form or another) can be found in three albums: "Del Shannon: A Complete Career Anthology 1961-1990" (Raven Records; 1998), "Runaway: The Very Best of Del Shannon" (Universal Music; 2010) and/or "The Dublin Sessions" (RockBeat Records; 2017). 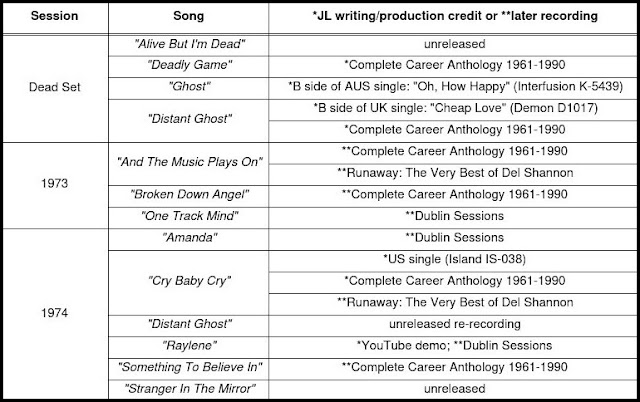 The above ELO Beatles Forever (ELOBF) tabulation (hopefully) lists the songs that came out of the aforementioned sessions and details their release history - be they as original or later (sometimes live) recordings - and where they can be found. Further info can be found via Del's official website at delshannon.com and/or Robert Porter's excellent Jeff Lynne Song Database. Yours Truly KJS is of the opinion that Del Shannon will always be a musician and an artiste worthy of mentioning in the same breath as the Greats.
Related elobf articles
One Way Love: When ELO Met ABBA
Livin' Twang: Duane Eddy with Jeff Lynne
The Story of Jeff Lynne & The Everly Brothers
Dave Edmunds: Information, Riff Raff & Jeff Lynne
Helen Reddy: Poor Little Fool (Written by Jeff Lynne)
Let It Shine A Little Love: Brian Wilson with Jeff Lynne
Nobody's Angel: Miss B Haven, Jeff Lynne & The Warwickshire Warblers
ELO Beatles Forever (ELOBF) recommends Del Shannon (Official Website) and the Jeff Lynne Song Database to those enlightened folks who enjoy the music of ELO/Jeff Lynne, Roy Wood, The Move, The Idle Race, 'Brum Beat', The Beatles and related artistes.
*** Until next "Time" in the elobf universe ... 20-Apr-2021 ***
Posted by Keith J Sinclair at 07:31 1 comment:

A Time to Remember 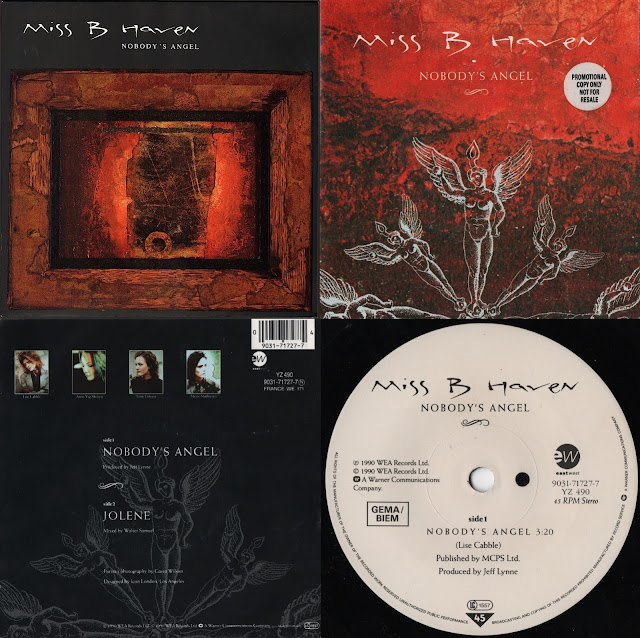 #1,580: Perhaps the biggest surprise of Jeff Lynne's post-Electric Light Orchestra production career to date was his involvement with the Danish all female quartet Miss B Haven for a trio of songs on their 1990 album "Nobody's Angel" (UK: EastWest #WX334). Their aforementioned long player comprised ten trax and was dominated by eight Lise Cabble penned songs, the others being a co-write with drummer Mette Mathiesen and a cover of the Steve Harley classic "Make Me Smile (Come Up And See Me)".
The songs produced by the ELO maestro were "You're Wrong" and "Sand In My Eyes" together with the title track (also released as a single) "Nobody's Angel" (UK: EastWest #YZ490) with Jeff contributing keyboards, backing vox and guitars ensuring a familiar feel to Lise's compositions and vocal talents. Miss B Haven were active for eleven (11) years from 1986-1997 and were Lise Cabble (lead vox), Anne Vig Skoven (guitar/bvox), Lene Eriksen (bass/bvox) and Mette Mathiesen (drums/bvox). Interestingly, you'll find Mette credited with drums/percussion for most of Jeff Lynne's "Armchair Theatre" album! She was also a member of The Warwickshire Warblers alongside Dave Scott-Morgan, Jake Commander, Phil Hatton, Richard and Sheila Tandy on "Blown Away". 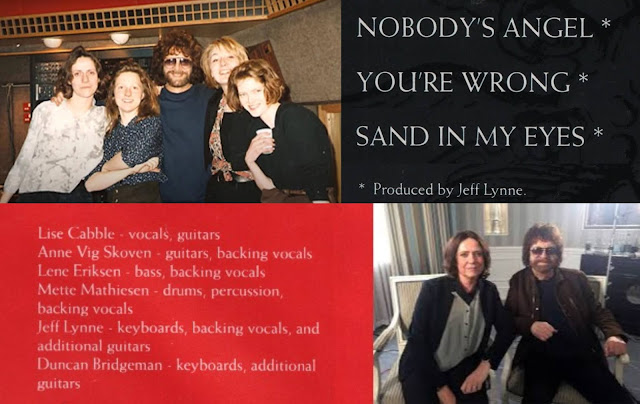 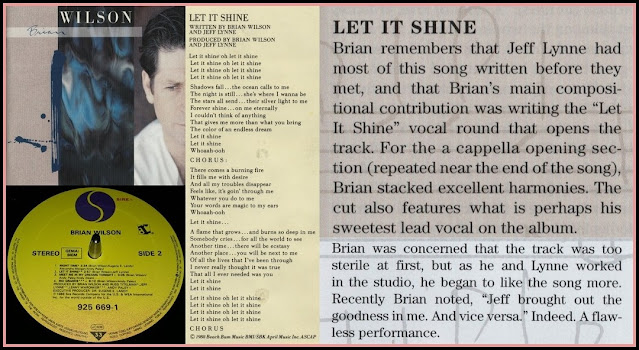 #1,579: Regular visitors to ELO Beatles Forever (ELOBF) would have hopefully enjoyed reading up in several recent articles about the songwriting, producing and solo activities of ELO maestro Jeff Lynne outside of his Electric Light Orchestra duties from 1978 with Helen Reddy to Duane Eddy in 1987 - the year (of course) in which his post-ELO production success in the afterglow of "Balance Of Power" truly took off with his work on George Harrison's "Cloud Nine" album. It was a year that also gave Jeff the opportunity to spend some time collaborating with another of his musical heroes: Beach Boys legend Brian Wilson in sunny California.
The co-written and co-produced anthem "Let It Shine" was the result of time Brian and Jeff spent together and it remains a fascinating musical fusion that ELO and Beach Boys fans still enjoy as an integral component of Brian's eponymously titled solo album (UK: Sire #WX157). The liner notes for the expanded CD edition in 2000 recall that the song was essentially in the bag before Brian added his trademark lead and a cappella vocals. Yours Truly KJS will leave the final word on "Let It Shine" with Jeff taken from this 2015 interview for Mojo:
"I hadn't known him at all, but Brian asked me if I wanted to write a song and produce it with him. "Yes, please - I'd love to!" I went to his house in Malibu and wrote it with him right by the seashore; his place was only a couple steps from the sea. Him playing piano and me strumming guitar and we came up with the song "Let It Shine". Anyway, we got to the session and I played lots of the instruments: bass and rhythm guitar and keyboard, and he did some keyboard, and we co-produced. Despite our production backgrounds, there wasn't a lot on it actually. It's a nice tight-sounding record." (Jeff Lynne; Mojo magazine issue #265; December 2015)
Related elobf articles
Caught Live: Brian Wilson @ Birmingham 17/05/16
Livin' Twang: Duane Eddy & Jeff Lynne
Helen Reddy: Poor Little Fool (Written by Jeff Lynne)
One Way Love: When ELO Met ABBA
The Story of Jeff Lynne & The Everly Brothers
Dave Edmunds: Information, Riff Raff & Jeff Lynne
ELO Beatles Forever (ELOBF) recommends Brian Wilson to those enlightened folks who enjoy the music of ELO/Jeff Lynne, Roy Wood, The Move, The Idle Race, 'Brum Beat', The Beatles and related artistes.
*** Until next "Time" in the elobf universe ... 04-Apr-2021 ***
Posted by Keith J Sinclair at 11:00 No comments: 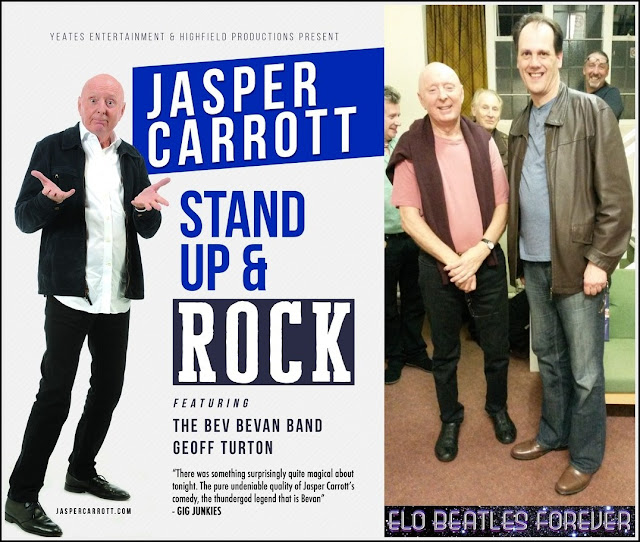