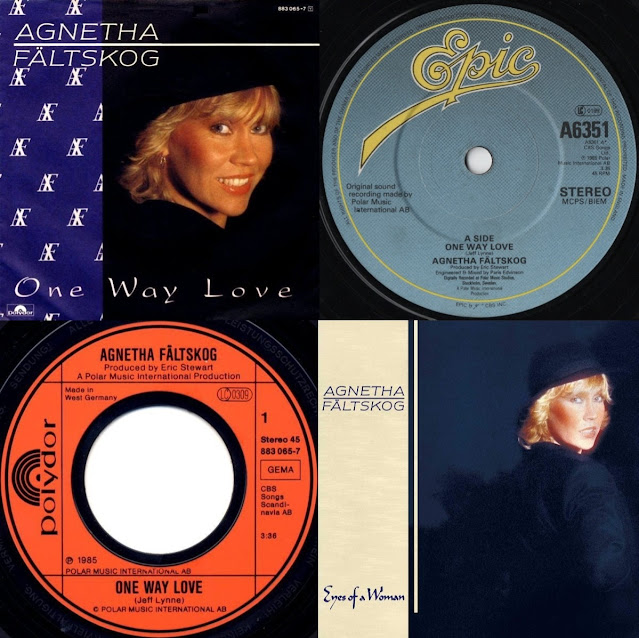 #1,572: If ELO maestro Jeff Lynne wasn't busy enough in the years betwixt their albums "Secret Messages" (1983) and "Balance Of Power" (1986) in working with Dave Edmunds, The Everly Brothers and providing songs for the film soundtrack to "Electric Dreams" (ably assisted, of course, by Richard Tandy), it was noteworthy that one of his songs made its way onto the second English language solo album "Eyes Of A Woman" (UK: Epic EPC26446) released in April 1985 by former ABBA member Agnetha Fältskog. 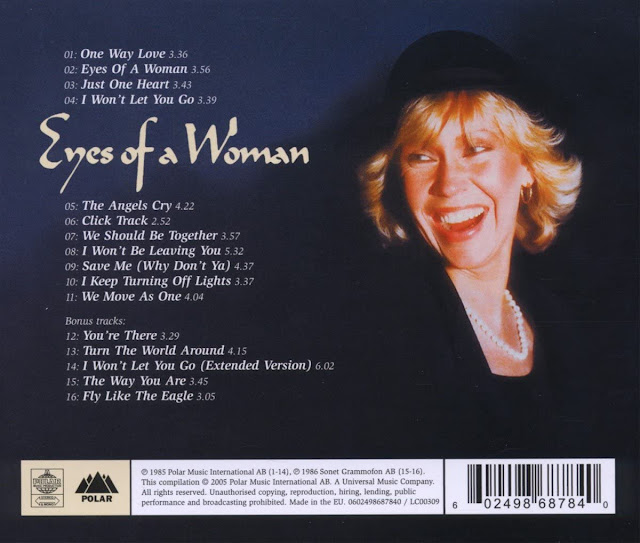 Sadly, the Lynne penned second single "One Way Love" (UK: Epic A6351) failed to trouble the UK Singles Chart although lead single "I Won't Let You Go" did manage #84 with the Eric Stewart (of 10cc fame) produced album peaking at a respectable #38 in the UK Album Chart. Released in Europe via Polydor, the UK/Eire release on the Epic label renders it a much sought after and unique record for completist fans and collectors of both ELO and ABBA. A remastered and expanded "Eyes Of A Woman" CD was issued in 2005. 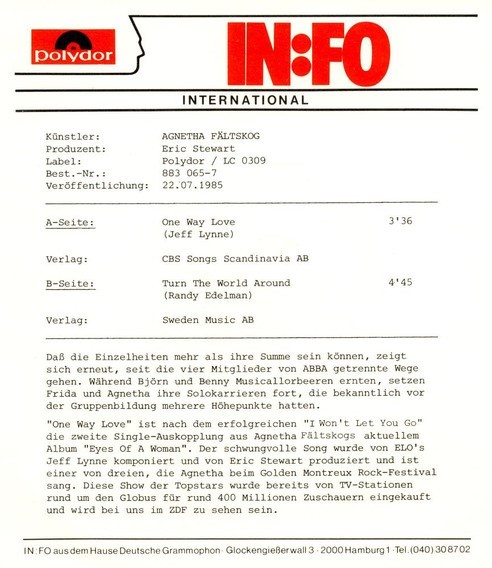 "That the individuals can be more than their sum has been shown again since the four members of ABBA went their separate ways. While Björn and Benny are harvesting musical awards, Frida and Agnetha continue their solo careers, which, as is well known, had several high points before the groups formation. After the successful "I Won't Let You Go", "One Way Love" is the second single from Agnetha Fältskog's current album "Eyes Of A Woman". The lively song is composed by ELO's Jeff Lynne and produced by Eric Stewart and is one of three that Agnetha sang at the Golden Montreux Rock Festival. This show featuring the top stars has already been broadcast by TV stations around the world to around 400 million viewers and can be seen on ZDF." (KJS/ELOBF translation)
Related KJS/ELOBF articles
The Story of Jeff Lynne & The Everly Brothers
Dave Edmunds: Information, Riff Raff & Jeff Lynne
Secret Messages: More Successful Than You Think
Best Remaster: Balance of Power
Jeff Lynne: The Solo Singles
*** Until next "Time" in the ELOBF Universe ... 14-March-2021 ***
Posted by Keith J Sinclair at 12:00