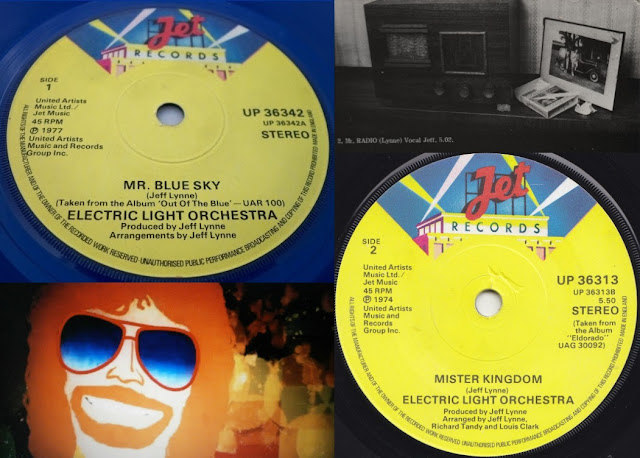 #1,560: Many fans of Electric Light Orchestra (ELO) will doubtless be aware than when it comes to the lyrical aspect of Jeff Lynne compositions, two of his most common themes are a certain colour ("Bluebird", "Boy Blue", "Midnight Blue" and so forth) and rain ("Showdown", "Standin' In The Rain", "Rain Is Falling" et al) but there are more. Yours Truly KJS has always been drawn to the trio of ELO songs that are prefixed with "Mr." or "Mister" which are "Mr. Radio", "Mister Kingdom" and (of course!) "Mr. Blue Sky".
"Mr. Radio" is found on side two of debut album "The Electric Light Orchestra" (also known as "No Answer" in the States for reasons oft explained by KJS/elobf) and completely fulfills the promise of the original ELO concept by Roy Wood and Jeff Lynne. It was also intended to be the second single taken from that initial LP (you can find the single edit on the EMI compilations "Harvest Showdown" (2005) and 2006's "The Harvest Years 1970-1973").
"Mister Kingdom" opened the flip side of ELO's acclaimed "Eldorado: A Symphony by the Electric Light Orchestra" album in 1974 and alongside the title track track caught my imagination as a young fan with its almost spiritual aspect of someone seeking escape from this present world. Many fans discovered this track as the 'B' side to the "Turn To Stone" single in late '77 and it's particularly poignant to this writer as it was the first record that I ever purchased.
What more can be said of "Mr. Blue Sky" than has already been written for almost five decades? It's been described as ELO's signature song, the greatest feel good song ever and still brings a smile to the face of both the avid and casual fan. Peaking at #6 in the UK (but only #35 in America) and the fourth movement of "Concerto For A Rainy Day" from "Out Of The Blue", MBS epitomizes the classic ELO sound and reflects Birmingham's finest at their orchestral peak.
Before I close out this article, a mention for my good friend Jib Khan and Starflight. "Dr. Radio" is a wonderful track found on their 2015 album "World Premiere" that deserves a mention with its ELOesque nod to "Mr. Radio" and "Mr. Blue Sky" (click here to view).
Related KJS/ELOBF articles
Waxing Lyrical: Beatles Forever
ELO 2021: 50th Anniversary Thoughts
My First Record: Turn To Stone (ELO)
Mr. Blue Sky: ELO's Signature Song
Mr. Blue Sky Tops Music Charity Feel Good Top 10
Review: World Premiere (Starflight)
*** Until next "Time" in the ELOBF Universe ... KJS ... 17-Jan-2021 ***
Posted by Keith J Sinclair at 23:00