Review: Made In Britain (Morganisation) 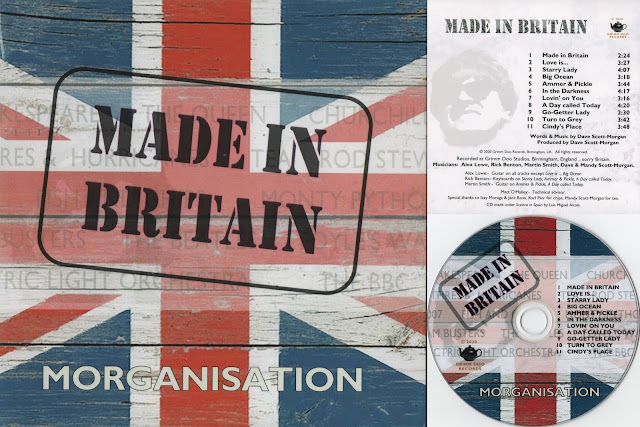 #1,540: Former Electric Light Orchestra member Dave Scott-Morgan is a man with a mission - literally! After a hectic decade in which he has released an amazingly prolific number of physical and digital albums, from the 2011 reissue of "Earthrise" through to the most recent "Seven", whether it be solo or with his Morganisation outfit, he has grasped the nuances of the modern music media business with both hands whilst writing and recording a remarkable collection of memorable songs.
As 2020 recedes, new album "Made In Britain" sees Dave and Morganisation return with an exceptional set of eleven new tunes thanx to the combined resources of wife Mandy, guitarist Alex Lowe and Rick Benton (Rebecca Downes, Magnum) whilst renewing musical acquaintances with fellow ex-ELO tourist and bassist Martin Smith (Balance of Power, 1986).
"an album just waiting to be discovered"
"Made In Britain" duly landed at elobf HQ earlier this week and Yours Truly KJS has to say that from the first play of track numero uno onward, this is a record that will most certainly appeal to not only Dave's growing band of admirers but also fans looking to explore and expand their musical horizons beyond the proverbial ELO spaceship. This is an impressive collection of songs that serves to highlight the songwriting and production skills of someone who is surely one of the most unsung of Birmingham's musical talents.
You could say this is an eclectic as you venture through the songs and you get the feeling that Morganisation had fun putting this together! Whether its the stomping rock 'n' rollers "Lovin' On You" and "Cindy's Place" or sublime ELOesque ballads "Starry Lady" and "A Day Called Today" (replete with a superb guitar solo!), the folksy almost Beatlesque "Go-Getter Lady", the pensive "Turn To Grey" or atypical Morganisation stomper "Love Is ...", you find yourself musing on how quickly "Made In Britain" seems to fly by. ELO fans will love the pacy if not funky opening title track and "In The Darkness" (which wouldn't be out of place on any of ELO's Eighties long players). Check out the expansive "Big Ocean" and the Celtic tinged "Ammer & Pickle" which has the feel of a glorious jam session too! Ultimately this is an album just waiting to be discovered and something that is sure to uplift the listener during difficult times. ★★★★★
"Time to get up and step out of the footprints of yesterdays sand"

"Made In Britain" can be purchased in CD (£11.99) and/or digital (£9.99) formats via these links thus:
www.musicglue.com/dave-scott-morgan/products/made-in-britain-cd
www.musicglue.com/dave-scott-morgan/products/made-in-britain-digital
Related KJS/ELOBF articles
Review: Bubbles (Morganisation)   Review: Highland EP (Morganisation)
Review: Wall To Wall (Dave Scott-Morgan)
Review: Earthrise (Morgan/Tandy)   Review: Across The Divide (Morgan)
elobeatlesforever (elobf) recommends "Made In Britain" by Morganisation to those enlightened folks who enjoy the music of ELO/Jeff Lynne, Roy Wood, The Move, The Idle Race, 'Brum Beat', The Beatles and related artistes.
*** Until next "Time" in the ELOBF Universe ... KJS ... 20-Oct-2020 ***
Posted by Keith J Sinclair at 23:35