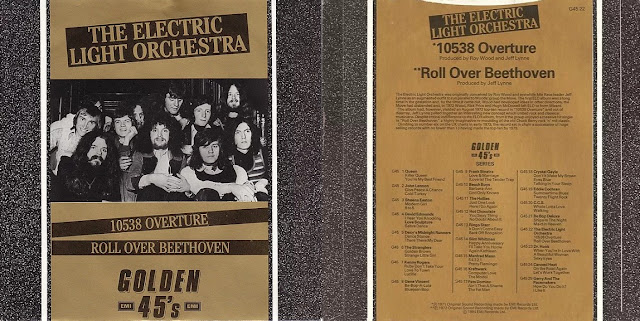 #1,534: In the three year hinterland between the release of the ELO studio albums "Secret Messages" (1983) and "Balance Of Power" (1986), fans of the Electric Light Orchestra were left largely looking to see what Jeff Lynne was up to, whether as a solo artiste in his own right or whether he was twiddling his knobs behind the production desk. June 1984 revealed the ELO maestro's involvement in the soundtrack of the aptly named film "Electric Dreams" wherein he contributed two songs (ably assisted by long time ELO cohort Richard Tandy) in "Video!" and "Let It Run", the former being released as a single (Virgin #VS695) which peaked at a modest #87 in the Official UK Singles Chart and the latter allegedly pencilled in as a single too should "Video!" have shifted significantly more copies. His writing and production work with Dave Edmunds and The Everly Brothers was also ongoing during this period (the subject of a forthcoming elobf article!) so avid fans and collectors were pleased when two early ELO classic hits were re-released as part of EMI's Golden 45's series.

Whereas EMI and Harvest had reaped the benefit of their early career with multiple compilations and two reissues of "Roll Over Beethoven" backed by "Showdown" (see this previous elobf article on that very subject), it was noteworthy that "10538 Overture" and "Roll Over Beethoven" (#G45 22) were the tracks selected in this case, ensuring that not only was Roy Wood's crucial role in ELO's formation acknowledged but also that both of ELO's Top 10 UK hits were included (the former peaking at #9 and the latter at #6 whereas "Showdown" managed #12). Initial copies were printed on a light blue backed version of the familiar Harvest label with rarer, more collectable editions following in black/silver or as an injection moulding. This was essentially a record for ELO completists yet is still a valued part of many collections (including that of this writer) - especially if replete with a solid centre!

Singled Out: The Battle Of Marston Moor

HAR5063: The Massacre of Manhattan Rumble