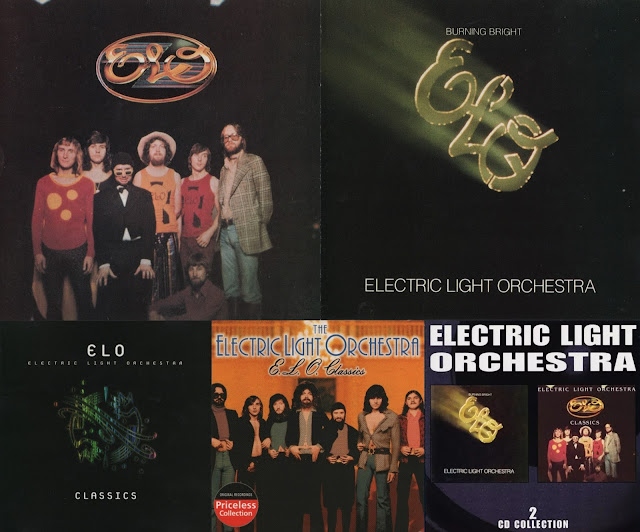 #1,541: Fans and collectors of all things Electric Light Orchestra (ELO) will tell you, if asked, that it is quite possibly impossible to come up with a definitive list of every ELO compilation released across all territories, whether it be on vinyl, tape or CD (not forgetting those in VHS, DVD and Blu-ray formats) starting with the early ELO Harvest Heritage retrospectives in the UK and the success of "Olé ELO" (United Artists/Jet #UA-LA630-G) in attaining a respectable #32 in the US Billboard 200 during the Summer of '76.
Over in the United States, the advent of the CD presented opportunities for CBS (later to be rebranded Sony Music and then Sony BMG) to release and licence budget greatest hits compilations that contained not only hits but also selected album trax. These compilations turned up both in record shops and supermarkets and produced buoyant sales for the larger labels and imprints. Naturally, ELO's extensive back catalogue was ripe for the issue of such CD (and initially cassette) collections. Yours Truly KJS and elobeatlesforever (elobf) thought that it would indeed be a good idea to put together a brief overview of those aforementioned releases for you to peruse at your leisure.

1990: "ELO Classics" (CBS Special Products #A21583) featured an odd cover merging artwork from the "ELO II" album with the familiar ELO logo from the "Out Of The Blue" spaceship. The first seven of the ten trax were US singles (including "Boy Blue") with "Bluebird", "Birmingham Blues" and "Loser Gone Wild" making up the numbers. There was also a pselling mitsake (see above).
1992: "Burning Bright" (Sony Music Special Products #A22639) comprised another selection of ten ELO songs with seven US singles (including "Stranger") plus "Standin' In The Rain", "Night In The City" and "Fire On High". The glowing ELO logo on a black background certainly made this collection stand out. One has to wonder what the rationale was for picking the album trax!

2001: "ELO Classics" (Sony Music Special Products #A52073) licensed through KRB Music Companies (#KRB7045-2) resurfaces as this reissue with a twist in that "Birmingham Blues" is swapped out with "Waterfall". The new artwork replete with "Time" era portrait again makes this attractive CD worth collecting! Perhaps they were thinking of the other Birmingham in Alabama!
2003: "ELO Classics" (Sony Music Custom Marketing Group Collectables #COL-CD-9341) makes another return but this time it's a straight reissue of the 1990 edition with rather strange cover art using Richard Avedon's famous "On The Third Day" portrait (on steroids!) on the front and the photo of ELO's Magnificent Seven taken from the "A New World Record" inner sleeve on the rear.

2007: "Electric Light Orchestra 2CD Collection" (Sony BMG Custom Marketing Group #A712251) sees both "ELO Classics" and "Burning Bright" bundled together as a bargain 2CD package with the original trax and artwork from 1990 and 1992 referenced. Of the quintet of compilations featured herein, this is perhaps the hardest to locate at the time of writing.
Related articles from the elobf archives
Shining A Light: Destination Unknown
Calling America: ELO's Unique US Singles
Another Chart Breaks: Early ELO in the UK & US
Olé ELO: Saluting ELO's First Successful Compilation
*** Until next "Time" in the ELOBF Universe ... KJS ... 23-Oct-2020 ***
Posted by Keith J Sinclair at 18:20