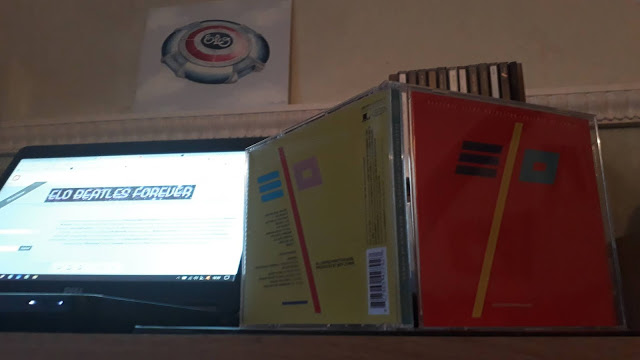 #1,537: Whether intentionally or not, some fans of the Electric Light Orchestra look down their proverbial noses at the 1986 LP "Balance of Power" (Epic/CBS Assoc EPC26467/FZ40048). The reasons are varied. Perhaps the dramatic change in sleeve artwork and logo (as discussed in this elobf article) was too much or that ELO were down to a trio or that those trademark strings were ever more diminished or even that, in most territories, the familiar Jet Records label was missing. "Balance of Power" was a relatively successful album commercially, managing #9 in the UK coming along almost three years (a lifetime in the career of some bands) after "Secret Messages" (which peaked at #4 amidst heavyweight competition - read this elobf article explaining why) with their popularity somewhat on the wane considering that "Discovery" (1979), "Xanadu" (1980) and "Time" (1981) peaked at #1, #2 and #1 respectively.

Which brings me to the subject of the "Balance of Power" expanded remaster. Like many fans and collectors, Yours Truly KJS was quick to snap up all of the Legacy album remasters that were released between 2001 and 2007. In my opinion, the BoP reissue is the best of the bunch in terms of its presentation and the bonus material included. Be it the wonderful alternative version of "Heaven Only Knows" or the inclusion of "In For The Kill" alongside its progenitor "Caught In A Trap" and "Destination Unknown" as well as the two alternative takes of "Secret Lives" and "Sorrow About To Fall", this expanded, value for money package ticked all the boxes for me even though both versions of "A Matter of Fact" (found on the 12" flip side of "So Serious") and the infamous "ELO Megamix" (found on the 12" flip side of "Getting To The Point") were omitted.

One has to wonder how "Balance of Power" would have fared with an alternate "Heaven Only Knows" as its opening track with "In For The Kill" added for good measure. Placing "Balance of Power" ahead of an "Out of the Blue" including the sublime "Latitude 88 North" or an "On The Third Day" replete with "Everyone's Born To Die" is no easy matter yet I am content to do so. Which begs the question: What was your fave ELO remaster of the series? Answers on a postcard ...