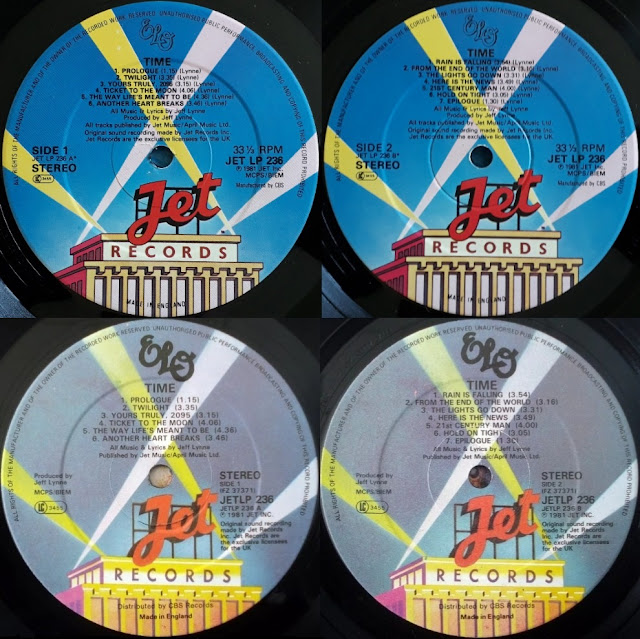 #1,533: Yours Truly KJS still fondly remembers hurtling up to Wolverhampton town centre back in early July 1981 to grab a copy of ELO's then new album "Time" (JETLP236/FZ37371). It had been the best part of a year since their involvement in the "Xanadu" soundtrack (JETLX526) had led to another quartet of hit singles including a debut UK #1 chart topper alongside Olivia Newton-John. Much was expected by fans, if not a change in their sound from what promised (and turned out to be) something futuristic and almost prophetic in its imagery.
Having bought some of the Jet/CBS album reissues of the Electric Light Orchestra's earlier studio albums in coloured vinyl, this writer was familiar with the greyish murky Jet Records label first found on the original Jet/Polydor issue of "Face The Music" (JETLP11) and how it contrasted with the rather attractive definitive, bright blue label that was found on the "Discovery" (JETLX500) and Greatest Hits (JETLX525) issues in 1979. It was therefore interesting to note that my newly purchased copy of "Time" had receded to the aforementioned grey label. I was unaware at the time (please excuse the pun!) that there was another pressing of ELO's second concept album that followed wherein its label reverted to that brighter Jet label that I much preferred.
Fast forwarding to Summer 2020, it was most satisfying to finally obtain a further copy of "Time" recently with the alternative label (in pristine condition) to add to my ever increasing collection. Check out the above montage to see both versions of the label. Being somewhat of an ELOnorak (as my closest friends will attest), I noticed that the familiar ELO logo also changed from solid black to shadowed not only on the LP but also between "Hold On Tight" (JET7011) and "Twilight" (JET7015), the first and second singles taken from the #1 album (see below). 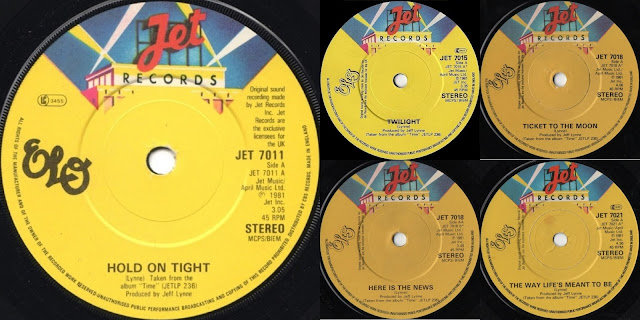 As often stated during the 11+ years that elobeatlesforever (elobf) has been around, there remains much pleasure not only listening to these classic records, but also collecting and writing about 'em ...

About Time: 21st Century Man   Concept Theory: Time as a 2LP Too?