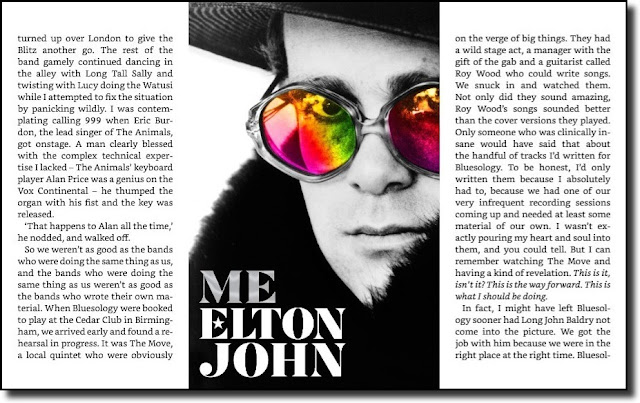 #1,519: Sometimes a chat goes in a direction that you did not foresee. Yours Truly KJS was talking about the music biz with Paul Harris (a friend and work colleague of mine) this week - specifically about the 'Top Of The Pops' albums that were a plenty in the seventies - and he mentioned that Elton John was one of the musicians who performed on those records.

Thus, having asked him where he had found out that interesting fact and his being aware of my involvement with elobeatlesforever (elobf), Paul told this writer that he'd also been reading Elton's recent official autobiography "Me" (Macmillan; ISBN 978-1509853311) and that both The Move and Roy Wood were mentioned therein thus:

"When Bluesology were booked to play at the Cedar Club in Birmingham, we arrived early and found a rehearsal in progress. It was The Move, a local quintet who were obviously on the verge of big things. They had a wild stage act, a manager (Ed: Tony Secunda) with the gift of the gab and a guitarist called Roy Wood who could write songs. We snuck in and watched them. Not only did they sound amazing, Roy Wood's songs sounded better than the cover versions they played ... But I can remember watching The Move and having a kind of revelation. This is it, isn't it? This is the way forward. This is what I should be doing." (end quote)

Perhaps it was written in the stars that not only would David Bowie play a significant role in the development of The Move but that The Move and a young Roy Wood would inspire Elton John in his career not forgetting that The Move themselves would eventually later morph into our beloved Electric Light Orchestra (ELO). What a privilege it must have been for Elton and clearly it was the motivation that he needed to step out of the proverbial shadows. The rest, they say, is history and all the more good reason to invest in Elton's book thus: