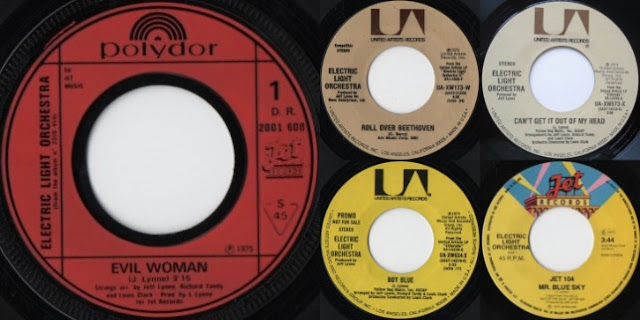 #1,521: After having recently obtained a rather nice copy of French edition of ELO's 1975 single "Evil Woman" b/w "10538 Overture (Live)" (Polydor/Jet 2001 608) timed at 3:15 long (as was the US single edit) versus the 4:28 long album version on "Face The Music", Yours Truly KJS was reminded how this much shortened edit completely tore the heart out of a song that still managed to peak at #10 in the States not forgetting that the UK issue also reached #10 albeit with a more acceptable, longer 4:12 edit.

The main reason for the rather dramatic practice of foreshortening the duration of many singles back in the day was, of course, largely down to the need to fit in with radio playlists where no more than four minutes was thought to be the optimum requirement for maximum audience impact with the added benefit that listeners would buy the album too to hear the song at its full length.

The reduction in the playing time of many Electric Light Orchestra singles was discussed in a previous 2018 elobeatlesforever (elobf) article entitled: Singled Out: The Edited Light Orchestra wherein KJS/elobf compared several single edits against their album counterparts. Here's what this writer considers to be the top five ELO singles most impacted by their amputation for the 7" format: