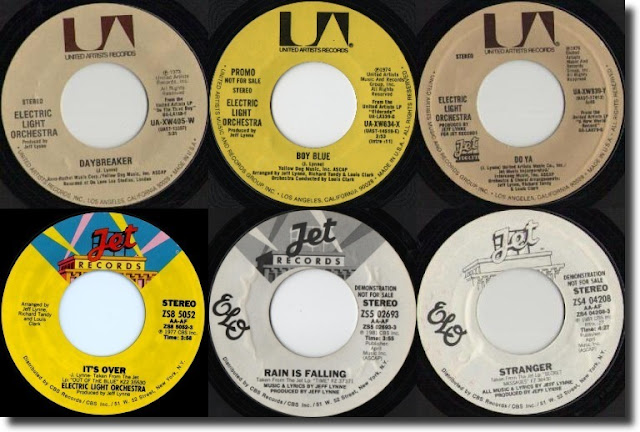 #1,525: A long time ago in a galaxy far, far away when what we now call the wold wide web was prophetic in science fiction circles, fans, followers and collectors of all things Electric Light Orchestra (ELO) found imports of their foreign releases all the more ... collectable! As a young fan and erstwhile record collector, Yours Truly KJS was always fascinated when I came across ELO's 7" American singles.

Whilst many were the same as their UK counterparts, some had alternate 'B' sides, some were coloured vinyl and the odd one was translucent. They were interesting (especially to completists) but the singles that a young KJS wanted were the singles that were unique to the States and not issued here in the UK. As far as this writer is concerned, there were half a dozen singles that I sought after and eventually held on tight to.

The first was "Daybreaker" b/w "Ma Ma Ma Belle" (United Artists #UA-XW405-W), essentially a double 'AA' side taken from "On The Third Day" which peaked at #87 in the US Billboard Top 100 thanx to ELO's seemingly endless "Do It With The Light On" tour dates. Note that "Daybreaker" wasn't included on the 1976 US hits compilation LP "Olé ELO" (UA-LA630-G) whereas "Ma Ma Ma Belle" was even though technically it did not chart.

Perhaps surprisingly, our second example is the much shortened edit of "Boy Blue" (United Artists #UA-XW634-X) which was issued as the follow-up single to "Can't Get It Out Of My Head" from the "Eldorado" album but, unfortunately, did not trouble the chart.


The third US only single was "Do Ya" (Jet/UA #UA-XW939-Y) in 1976 with ELO riding on the crest of a wave thanx to the success of "A New World Record". Peaking at a respectable #24, "Do Ya" was chosen in lieu of "Rockaria!" as a single for the American market whilst underlining the strong bonds between The Move and ELO.

Fast forwarding to 1981 and our fifth US only single which is "Rain Is Falling" (Jet/CBS #ZS5 02693), taken from ELO's futuresque "Time" album. Whereas four singles were released in the UK from "Time" including another 'AA' side single, only "Hold On Tight", "Twilight" and "Rain Is Falling" (which did not breach the Top 100) were issued stateside in the 7" format.

Finally we come to "Secret Messages" and what many British fans thought would've been a good choice as a single in the UK. "Stranger" (Jet/CBS #ZS4 04208) is the sixth US only single released (as opposed to the title track elsewhere) which, sadly, also did not make the Billboard Top 100. It was however issued in Holland (Jet/CBS #A4070) as a rather attractive third* single from "Secret Messages".
*Note that "Stranger" was not the fourth Dutch single as originally stated in this article due to "Four Little Diamonds" (Jet/CBS #A3869) being pressed in Holland for release in Germany. Thanx to my good friend Patrik Guttenbacher of FTM Germany for the clarification!