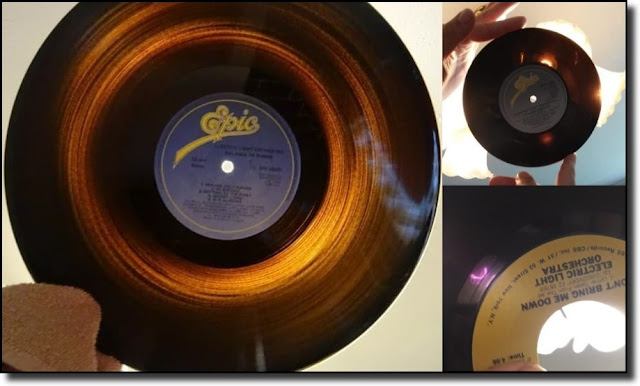 #1,513: One of the facets of being an avid Electric Light Orchestra (ELO) and related artistes record (vinyl) collector is that you can come across and learn something about the actual manufacturing of the records that we all know and love if not some of the variations in those processes. Indeed, in this recent elobf article, we highlighted eight UK issued injection moulded ELO singles and briefly covered their origin in the early seventies origin and cost reducing purpose.

Which brings Yours Truly KJS to the subject of this article! Did you know that some ELO records pressed in the Republic of Ireland and the States although supposedly black and opaque are actually translucent? The definition of the word translucent is a substance allowing light to pass through but not defined shapes; semi-transparent. And that is the case with three records that grace my personal record collection.

It's been a few decades since I discovered that if I held up my US import copy of ELO's 1979 hit single "Don't Bring Me Down" b/w "Dreaming Of 4000" (Jet/CBS ZS9 5060) up to a decent wattage light bulb, it was actually possible to see through it in a dark brown haze. The reason for this is that it was actually made from styrene (a la polystyrene), essentially cheaper recycled plastic possibly due to the oil crisis back in the day. Note also that some top quality audiophile records pressed in what was termed 'super vinyl' also had the same feature.

Fast forward seven years to 1986 and across the North Atlantic to Eire and if you were lucky enough to buy a copy of ELO's LP "Balance Of Power" (Epic EPC26467) or lead single "Calling America" b/w "Caught In A Trap" (Epic A6844), you would've also found out that both also had a brownish transparency when held up to a light. Check out the above elobeatlesforever (elobf) photo montage! You can see that it's much easier to see the translucency in those two Epic releases.

Whereas it is easy and cheap to obtain a styrene copy of "Don't Bring Me Down" via eBay or Discogs, finding translucent copies of "Balance Of Power" and "Calling America" is likely more difficult making them desirable to collectors and quite valuable.