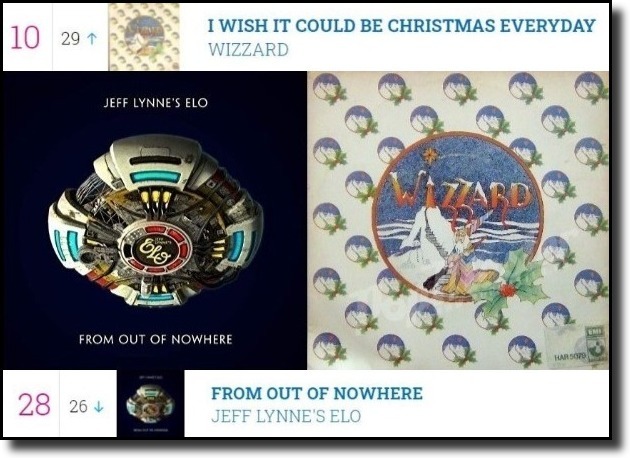 #1,509: As we approach the end of a decade in which elobeatlesforever (elobf) has seen healthy growth from modest beginnings, it seems apt and right to acknowledge another significant milestone for The Move, ELO and Wizzard co-founder Roy Wood.

In the week that saw Jeff Lynne's ELO and "From Out Of Nowhere" remain in the Official Top 30 Album Chart in slipping from #26 to #28 (after 8 weeks), astute fans of Roy Wood will be delighted to see Wizzard rise an amazing nineteen places #10 in the Official Singles Chart with their seasonal classic "I Wish It Could Be Christmas Everyday" giving Woody his first UK Top 10 single when "Are You Ready To Rock?" peaked at #8 in January 1975.

The continued resurgence of IWICBCE is, of course, a result of the inclusion of download and streaming sales by the Official UK Charts Company since 2007 and, looking at the above elobf table, you can see a steady increase in the peak chart position over the last decade of what many folks still consider to be the ultimate Christmas song since it originally reached #4 in December 1973.

Yours Truly KJS and elobeatlesforever (elobf) would like to congratulate both Roy and Wizzard for attaining their first Top 10 single in almost 45 years and hope that we will soon see some long awaited new material, even an album, in the approaching decade.

Labels: All Over The World, elobeatlesforever, elobf, From Out Of Nowhere, I Wish It Could Be Christmas Every Day, Jeff Lynne's ELO, Official Album Chart, Official Singles Chart, Roy Wood, Wizzard