ChartWatch: From Out Of Nowhere Exits Top 10 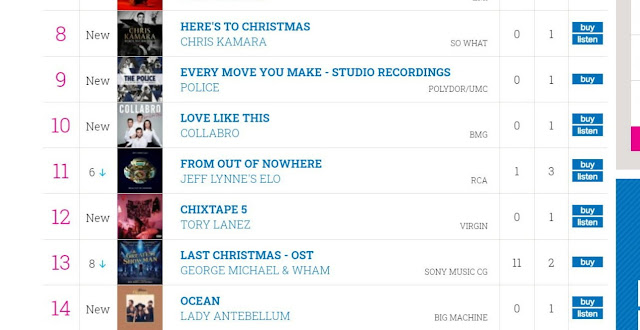 #1,494: As expected, "From Out Of Nowhere" has left the UK Top 10 according the Official Albums Chart Update published yesterday (Monday 18th November). The triumphant recent ten track outing from Jeff Lynne's ELO entered the full chart at #1 in its first week of release before slipping to #7 last week and is now at #11 halfway through this third week.

You may recall that "Alone In The Universe" peaked at #4 in 2015 and eventually managed a respectable 17 week chart run with "Wembley Or Bust" following it two years later into the Top 10 at #9 with an ensuing 7 week chart life. It'll be interesting to see how long FOON hangs around in the UK Top 100 as a plethora of pre-Christmas new releases and compilations flood the market. You can rely on Yours Truly KJS and elobeatlesforever (elobf) to keep an eye on proceedings and we will report back (hopefully) in the weeks to come!