#1,498: Today is Monday 25th November and it's also Bev Bevan's 75th birthday! After starting out with Denny Laine & The Diplomats and then Carl Wayne & The Vikings, Bev co-founded The Move alongside Roy Wood, Trevor Burton, Carl Wayne and Chris 'Ace' Kefford before, of course, also co-founding the Electric Light Orchestra alongside Roy Wood (again) and Jeff Lynne and then ELO Part II. Bev also played with Black Sabbath on their "Born Again" tour and more recently has performed with best pal Jasper Carrott in both the Made In Brum and Stand Up & Rock! shows as well as performing with Quill in a 50+ year stellar career.
Throughout the 10+ years of elobeatlesforever (elobf), Yours Truly KJS has often bumped into Bev (often discussing the fortunes of Wolves FC as well as the biz) and featured his many musical projects on multiple occasions. We were there when he received his Broad Street Walk of Fame Star in April 2011 (review here) and also celebrated his induction into the Rock & Roll Hall of Fame in 2017 (report here). Bev has often been supportive of and extended much courtesy to elobf and aside from being the best drummer in the business, the powerhouse of the classic ELO line-up and keeping the music of ELO live (and alive) in the nineties with ELO Part II, it goes without saying that we wish Bev a Very Happy 75th Birthday!
By the way, you can still catch Bev performing with Quill during their upcoming Christmas Tour between Saturday 7th and Sunday 22nd December. See poster below for more details or click on this link to buy tickets: www.ents24.com/uk/tour-dates/quill 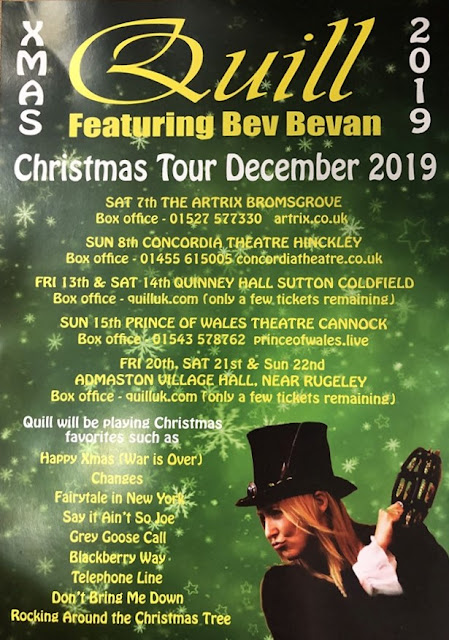