Review: Sometimes They Get Into The Machinery (Imaginary Creatures) 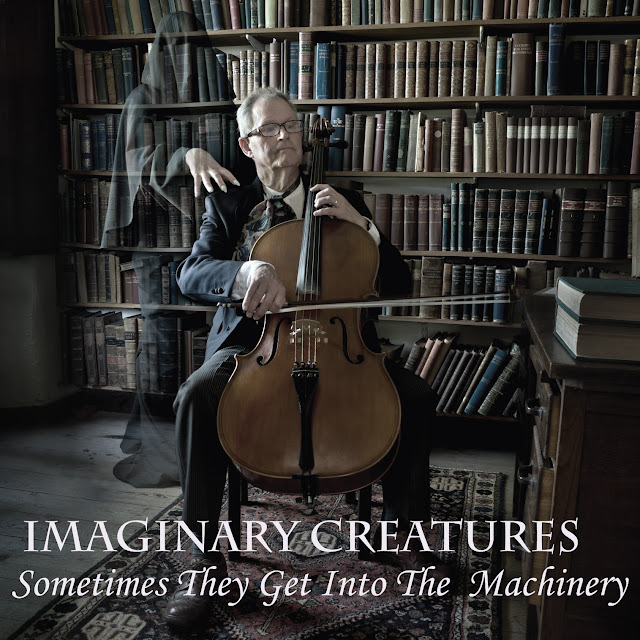 #1,483: When lyricist and songwriter David Scott contacted Yours Truly KJS recently regarding the release of "Sometimes They Get Into The Machinery", the latest and fourth studio album from his virtual band Imaginary Creatures, informing me that it's a release heavily influenced by early ELO and recorded with "real strings - principally cellos", this particular writer was instantly intrigued and very much looking forward to listening to it in readiness for this latest elobeatlesforever (elobf) review.

.Imaginary Creatures is a collaboration with producer, composer and multi-instrumentalist Iain McKinna with "Sometimes They Get Into The Machinery" also featuring the late, great Ted McKenna (The Sensational Alex Harvey Band, Rory Gallagher, Band of Friends, Michael Schenker Fest and many more) on drums alongside cellists Wendy Weatherby and Ron Shaw not forgetting violinist Seonaid Aitken. This is very definitely a progressive rock album with a supernatural theme throughout underpinned by some wonderful, earthy string arrangements and a sound that draws on those first three ELO long players: "Electric Light Orchestra" (or "No Answer" in the States), "ELO2" and "On The Third Day".

Indeed, there are moments here where you get an idea of what ELO might have become if Roy Wood had not have left to form Wizzard ("At Winter's End" being an example). "Dreams Of California" has a late Move feel to it and there is plenty here to please those who love the early ELO outpourings of Jeff Lynne too. Have a listen to "Mr. Teddy Bear", a track with a deferential nod to both "Mr. Radio" or "The Messenger", a real ELOesque rocker in all but name and reminiscent of "Ma Ma Ma Belle". You can even hear Roy Wood and ELO quoted in the lyrics for "The Night" if you listen carefully!

"Sometimes They Get Into The Machinery" (Birnam CD #IMAGC004CD) is twelve songs to be listened to in its entirety - as is the case with all prog rock records. This is an album that will delight those who found ELO in their early days, fans of both Roy Wood and Jeff Lynne, and the followers who came thereafter. ★★★★★


You can find out more about "Sometimes They Get Into The Machinery" by Imaginary Creatures via these links thus:

elobeatlesforever (elobf) recommends "Sometimes They Get Into The Machinery" by Imaginary Creatures to those enlightened folks who enjoy the music of ELO/Jeff Lynne, Roy Wood, The Move, 'Brum Beat', The Beatles and related artistes.