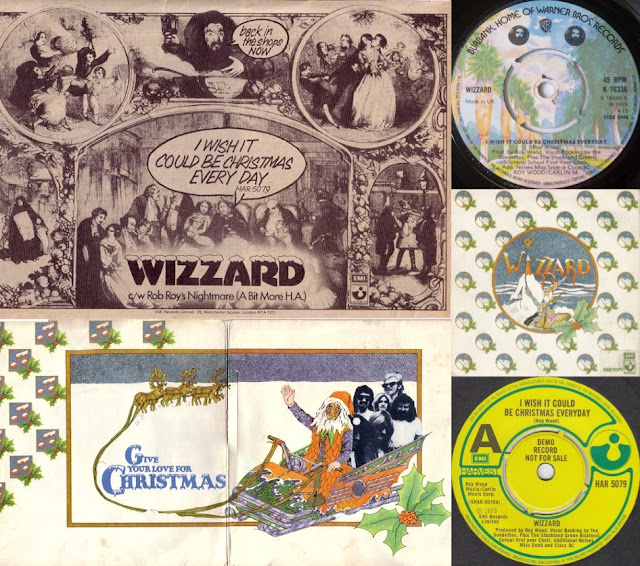 #1,474: It's widely known that Slade's festive single "Merry Xmas Everyone" beat Roy Wood and Wizzard to the coveted #1 spot in the UK Singles Chart during Christmas 1973. Many folks presume that Wizzard made #2 that year but "I Wish It Could Be Christmas Everyday" actually peaked at #4 whilst Roy's solo single "Forever" (HAR5078) was holding its own at #11 at the same time, later to peak at #8 in January 1974.

Yours Truly KJS thinx that the main reason for Wizzard not challenging Slade more closely at the chart summit lies with the aborted release of IWICBCE via Warner Bros. (K16336) whereupon it was deemed in breach of their recording contract with EMI/Harvest and subsequently released weeks later on the Harvest label (HAR5079) with some copies sporting a Harvest sticker. Both issues were backed by "Rob Roy's Nightmare (A Bit More H.A.)", an instrumental track credited to Mike Burney. Perhaps the fact that there were two Roy Wood penned songs released at the same time was another factor as was the fact that the Top 12 was also occupied by such big selling artistes as Gary Glitter, The New Seekers, Marie Osmond, Alvin Stardust, Leo Sayer, David Essex, Mott The Hoople, Roxy Music and T.Rex meaning that the competition was stiff. You may be surprised to read that Elton John's "Step Into Christmas" stalled at #24 to underline just how competitive it was.
Wizzard's "I Wish It Could Be Christmas Everyday" therefore has something in common with ELO's 1983 album "Secret Messages" (JETLX527). Both peaked at #4 in their respective charts, both might be seen as underachieving in chart terms yet both ultimately performed relatively well when compared with the competition at the time. Note also that Wizzard have outperformed Slade in the Christmas chart on many occasions since 1973. Why not read these related elobeatlesforever (elobf) articles for further information on the above?

This article has been developed from a suggestion by my good friend John Collins.