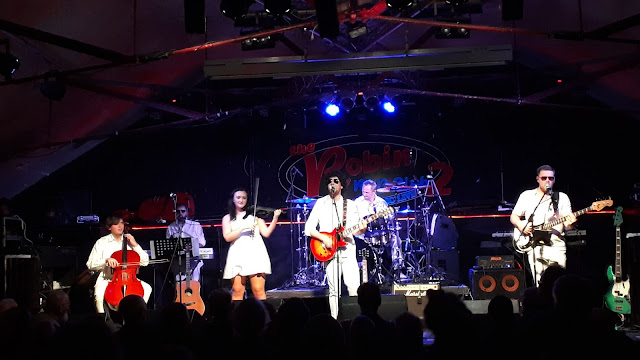 #1,473: A ninth opportunity for Yours Truly KJS to go see South Wales septet ELO Again perform the music of the Electric Light Orchestra - again - at The Robin 2 was not be missed on Friday night (7th December) as a healthy audience were taken on another musical journey through classic ELO all the way through from debut hit "10538 Overture" to 1986's "Calling America" and sampling every studio album from "The Electric Light Orchestra" (or "No Answer" in the US) to "Balance Of Power" in the process.

A lot has changed since elobeatlesforever (elobf) first reviewed an ELO Again gig back in November 2013 with only cellist Sion Dafydd Dawson an ever present (they're in good company as this is also the case with Jeff Lynne and ELO these days). Yet, on the basis of this performance and the reaction of those assembled, ELO Again have developed an entertaining tribute to Birmingham's best. In the 51 weeks since their last visit to Bilston, the obvious difference in the band to seasoned followers was new singer/guitarist Joel Jordan, who seemed to enjoy his West Midlands bow combining his vocals with some nice guitar work whilst working an enthusiastic crowd into several bouts of Black Country banter. The only tweak in the set from last time was the inclusion of "Strange Magic" in lieu of "When I Was A Boy" and this made for an impressive foray through those hit (UK) singles we all know and love plus "Do Ya" and "Tightrope". Fave moments for me were their renditions of the aforementioned "Calling America" and "Tightrope".

Given the growing pool of ELO tribute acts in the UK these days, I think any ensuing competition will only benefit the paying public and fans. On the other hand, I also strongly believe that each tribute has its own identity and uniqueness. Would I go see ELO Again - again? I think so. 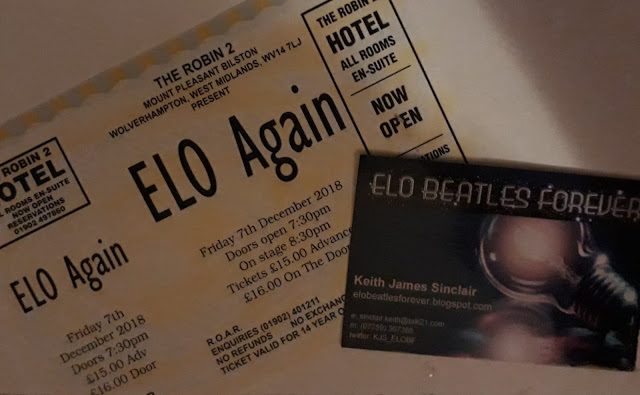 Midlands based ELO based fans will have another opportunity to see ELO Again soon when they land at Lichfield's Garrick Theatre on Friday 11th January 2019. Limited tickets can be purchased via this link thus: www.lichfieldgarrick.com/whats-on/tribute/elo-again/2353

Find out more about ELO Again and their show via their official web site thus: