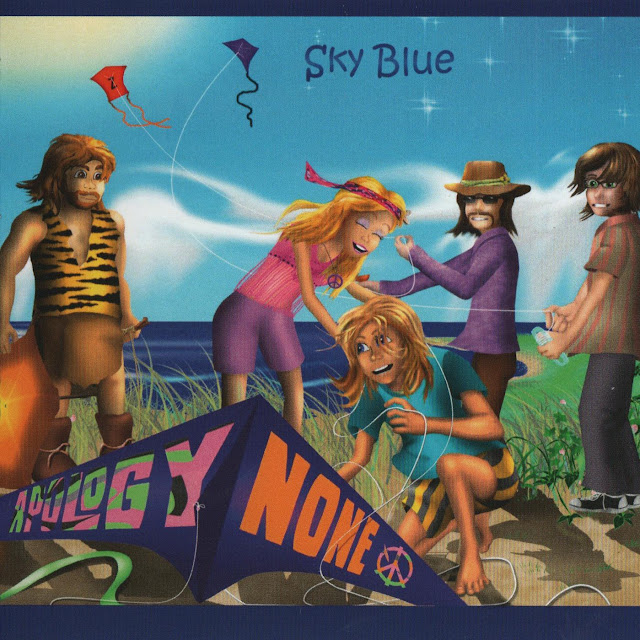 #1,467: Both The Beatles and The Move delved into the psychedelic during their Sixties journey, as did not a few other bands trying to find their feet as the decade came to an end. It should therefore come as no surprise that, of all things, there should be artistes in the here and now who are still exploring that territory. Apology None, who are no strangers to long time readers of elobeatlesforever (elobf), are a group with a difference in that they also double up as a cartoon! As if to underline that fact, the inner inlay of the CD tray states: "Hear our tunes and watch our toons!" ... and so you should.

Their latest album "Sky Blue", the third offering from Apology None maestro Tim Ross, has just been released and carries on where 2014's "Satur-delia" left off to an extent. Aided and abetted on this occasion by the drums of Sean Mack Page (Fragile X, Imaginos), this album does need a couple of plays to get into the groove. Having said that, there is lot going on here as this sometimes manic, multi-instrumental work unwinds and starts to dip its proverbial toes into progressive rock territory at its conclusion. Certainly, Yours Truly KJS found the second half of this record from "River Dragon" onward more expansive and likely to appeal to intrigued listeners with tracks such as "Journey Jeannie", "Calling Cathy Hollingsworth", "Here We Are" and title track "Sky Blue" of note. If you are still seeking an new audio trip in the digital age, this might just be it. ★★★★

You can read up on all things Apology None via their official web sites thus:

"Sky Blue" by Apology None is available in CD and/or download formats via these links thus:

elobeatlesforever (elobf) recommends "Sky Blue" by Apology None to those enlightened folks who enjoy the music of ELO/Jeff Lynne, The Move, Roy Wood, The Idle Race, 'Brum Beat', The Beatles and related artistes.