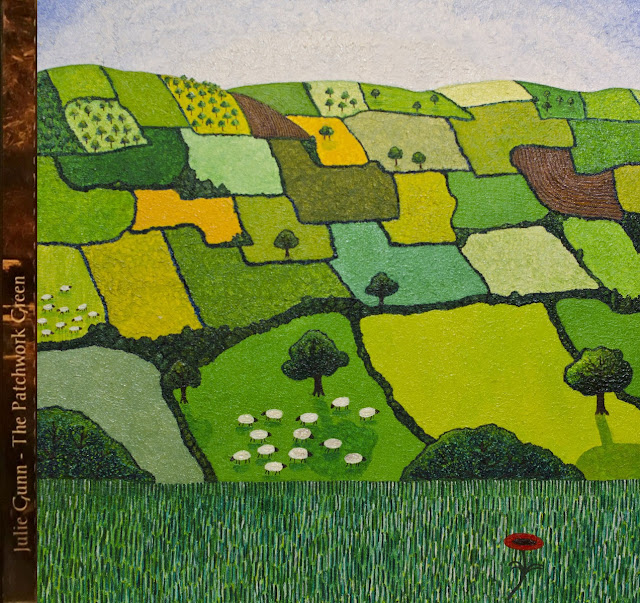 #1,469: One of the great pleasures of running elobeatlesforever (elobf) is to occasionally be able to feature indie artistes - be they local, national or international - because Yours Truly KJS can! Julie Gunn is one such musician who shares my love for all things ELO and Roy Wood and lives just down the proverbial Birmingham New Road. I finally got to meet Julie at the recent Morganisation gig in Hockley Heath and during our chat she kindly handed me a copy of her debut solo album "The Patchwork Green", released originally in late 2014.

And what a remarkable album "The Patchwork Green" is! Hugely influenced by her love of all things Pink Floyd, this is a set of songs that you instantly warm to with excursions into rock ("When Can I Play?"), prog rock ("Spread Our Wings", "Deja Vu") and quirky power pop ("How Long?", "Rocked My World") with a nod to Woody thrown in for good measure thanx to "Spirit Your Way (Saudade)", a track undoubtedly influenced by Roy's early ELO classic "Whisper In the Night". Julie's vocals at times are reminiscent of the late, great Kirsty MacColl yet the overriding theme of this album is her amazing guitar prowess and all round musicianship, examples being (but not limited to) the instrumental "Jeanne D'Arc", the epic "So Far Away" (with a phenomenal guitar solo) and the magnificent "Temple Of The Gods". The aforementioned "Spirit Your Way (Saudade)" remains a fave alongside the elevating, iconic "Can You Feel?". My only regret is that it's taken me four years to hear and subsequently review this gem. ★★★★

"The Patchwork Green" by Julie Gunn can be obtained directly in CD format here &/or in digital format via these links thus:

elobeatlesforever (elobf) recommends "The Patchwork Green" by Julie Gunn to those enlightened folks who enjoy the music of ELO/Jeff Lynne, The Move, Roy Wood, The Idle Race, 'Brum Beat', The Beatles and related artistes.