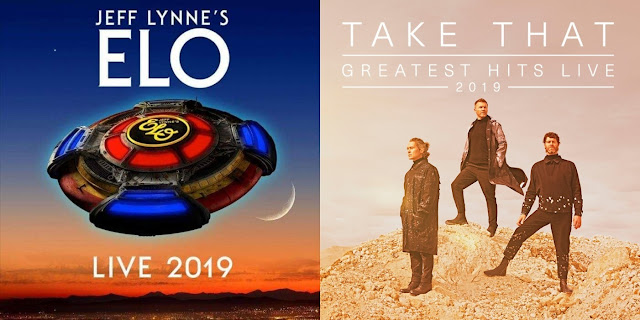 #1,460: As suggested in this elobeatlesforever (elobf) article last weekend, Jeff Lynne's ELO confirmed a twenty (20) date tour of the United States and Canada during Summer 2019 commencing at Anaheim on Thursday 20th June and finishing in Pittsburgh on Thursday 1st August. Whilst it was not a surprise in and of itself, a return to more North American shows so soon did raise a few third eyebrows.

Yet when Yours Truly KJS looked at the EJLO tour itinerary, the most obvious aspect was that there will be a significant clash with nine (9) Take That Greatest Hits Live 2019 tour concerts taking place in Europe at the same time as Jeff Lynne's ELO are scheduled to play six (6) gigs up and down the Pacific coast (see table below). Therefore, we must draw the conclusion that either Take That or Jeff Lynne will utilize a new touring band (at least in part). This would be a departure for either artist and, if Mike Stevens, Milton McDonald and Donovan Hepburn are contracted for the TT dates, it will be interesting to see which musicians will back the ELO maestro for his shows - likewise if the scenario is reversed. Watch that space!

Tickets for the Jeff Lynne's ELO 2019 US tour go on sale to the general public on Monday 29th October. Click on these links for further details thus:

Find out more about Take That 2019 UK/EU tour dates and tickets via this link thus:
takethat.com   takethat.twickets.live

elobeatlesforever (elobf) recommends Jeff Lynne's ELO and Take That on tour in 2019 to those enlightened folks who love ELO, Jeff Lynne, Roy Wood, 'Brum Beat', The Idle Race, The Traveling Wilburys, The Move, The Beatles and related artistes.