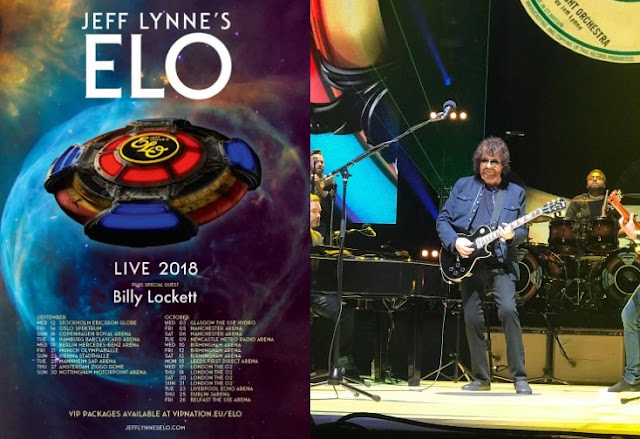 #1,454: Unfortunately, Yours Truly KJS was not in a position to attend the recent trio of Jeff Lynne's ELO dates "Down Home Town" in Brum last week at Arena Birmingham (NIA) but the good news is that my friend John Collins has written a guest review for elobeatlesforever (elobf) covering the proceedings last night (Saturday 13th October) that has captured the spirit thus:

"There really is nothing quite like a Saturday night for a concert, even better when Birmingham’s favourite son returns to his home city and brings his fantastic band with him, safe in the knowledge that the vast majority of that audience are fellow Brummies. You can’t go wrong!

So, into the first number “Standin’ In The Rain”, which thunders in and epitomises everything what ELO’s music is about. No sooner had the deafening applause just died down, we were straight into the next song “Evil Woman”. This was the pattern really for the rest of the night, basically the ELO hit jukebox. Jeff did not say much between songs, he said “Hi!” after “Evil Woman”, announced he was going to play a song from his other group and “Handle With Care” followed, and said “Goodnight!” but that was about it as far as communication with the audience went. Some people did not seem to be happy about this, but personally I don’t want Jeff announcing each song. I think I, like most of the audience, knew what song it was after five notes and what album it’s from.

The highlights of the night seemed to be “Livin’ Thing”, “Rockaria!”, “Shine A Little Love”, “Sweet Talkin’ Woman”, “Turn To Stone” and everyone was out of their seats by “Mr. Blue Sky”, although I have to say there was dancing three songs in with “All Over The World”. I always smile when I hear the line with “Shard End”. Can’t be many worldwide hits with a suburb of our beloved city in it! My only disappointment was that there was no “Can’t Get It Out Of My Head” and, surprisingly, nothing from the “Time” album. At this point I have to mention the lighting and the screen behind the band which was just fantastic. If you were at the back you were really lucky, because I suspect the view was just jaw dropping. Loved the Jet record spinning round for “Rockaria!” and the Harvest one for “Roll Over Beethoven”. The real showstopper for me was the lasers during “Telephone Line”, it was very special.

As always, the band were perfection, Jeff delegated some of the singing duties to the band, but his voice for a guy of his age was really good. In truth Jeff could stop singing anytime and let the audience take over, as they were great last night. When he was introduced later there was a standing ovation, which he looked quite touched about, but thoroughly deserved."
~ John Collins ~

elobeatlesforever (elobf) recommends Jeff Lynne's ELO Live 2018 to those enlightened folks who love ELO/Jeff Lynne, Roy Wood, 'Brum Beat', The Idle Race, The Traveling Wilburys, The Move, The Beatles and related artistes.
~ Many thanx to JC for this review ~