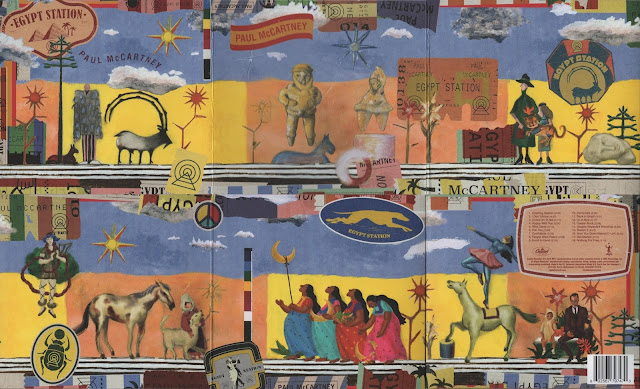 #1,446: It's been five long years since Paul McCartney unleashed his previous "New" album back in 2013 and over three years since Yours Truly KJS was fortunate enough to be one of the 15,800 fans in attendance in Birmingham during his "Out There" tour in May 2015. A review of Paul's new studio album "Egypt Station" is therefore in order following its release last week.

With the deluxe edition boasting two extra trax taking it to a duration of over an hour, "Egypt Station" has plenty of opportunities for this Beatle to try his hand at a plethora of styles and, lyrically, take the listener on a journey from the autobiographical to the anthemic beneath his revived ancient Egyptian album art. McCartney can write a tune (as we all know) but what strikes me about this record is that it goes all over the place musically speaking from the commercial aspect of "Fuh You" to the soul bearing "Confidante". With up to eighteen songs present, some might say there are some weaker efforts in amongst the pearls but this writer sees "Egypt Station" as something with a greater whole.

This is perhaps the only album that I've reviewed for elobeatlesforever (elobf) that retains its integrity even when I select random play on my CD deck! "Egypt Station" demonstrates that Macca still has it, even at 76 years of age. His voice holds up well and there are some fab songs to be found here, some guitar and some piano led. "Happy With You", "I Don't Know" (the lead single), "People Want Peace", "Do It Now", "Hand In Hand", "Dominoes", "Get Started" ... the list goes on. Without a doubt, the two longest trax are those that impress most. Three part medley "Hunt You Down/Naked/C-Link" sees McCartney in eclectic form (some nice guitar work within) and is great fun with the album highlight "Despite Repeated Warnings" almost entering prog territory with its foreboding storyline and changes in tempo. "Egypt Station" does grow on you after every play and is a pleasure to run the rule over. If this particular ELO/Jeff Lynne fan likes it from a semi-neutral standpoint, then you quite possibly could do too. ★★★★★


Find out more about "Egypt Station" by Paul McCartney via this link thus:

elobeatlesforever (elobf) recommends "Egypt Station" by Paul McCartney to those enlightened folks who enjoy the music of ELO/Jeff Lynne, Roy Wood, The Move, The Idle Race, 'Brum Beat', The Beatles and related artistes.