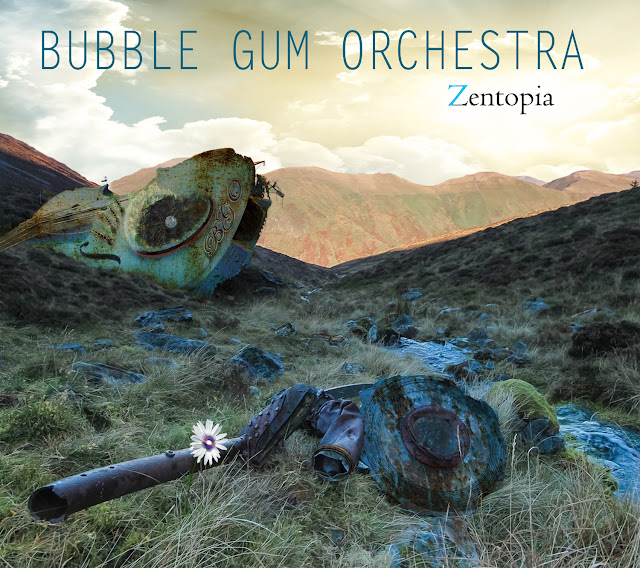 #1,431: Who'd have thought that seven years after Michael Laine Hildebrandt and his Bubble Gum Orchestra crashed into the elobeatlesforever (elobf) universe with "Out Of This World" that Yours Truly KJS would be here in Summer 2018 casting an eye over the event horizon at BGO's seventh studio album "Zentopia"? Yet here we are enthusing about a remarkable eleven song outing in more ways than one as BGO blend emotion, angst and even eroticism alongside classic sci-fi and an affirming tribute with a little help from brother Douglas and former band mate Bob Stewart in a record that will never be technically released but always available to hear.
"Zentopia" is an album of contrasts instantly taking the listener from the peaceful overtures of the opening title track to the wonderfully anthemic rocker "Hail! Hail! Hail! To The Underdogs", a tune that resonates with this particular writer much. The theme of time permeates this record, as evidenced in the catchy "Tomorrow's Overrated" before the anti-romantic foot-tapper "Just Another Girl" with its alter ego "Do It With The Lights On" on a different level with, let us say, its naked ambition underpinned by those familiar BGO production values. You get the idea listening to this record that Michael is baring his soul from either end of his life experiences. In that way, this is a very personal album. Cue the almost psychedelic "Love Me" and "Stop Chasing Flowers", an appraisal of a former friend with a bitterness and honesty not heard since ABC's iconic "The Lexicon Of Love". We then jump to the diametrically opposite up beat sentiment of thankfulness "I'm So Glad" (with its superb guitar licks and solo). 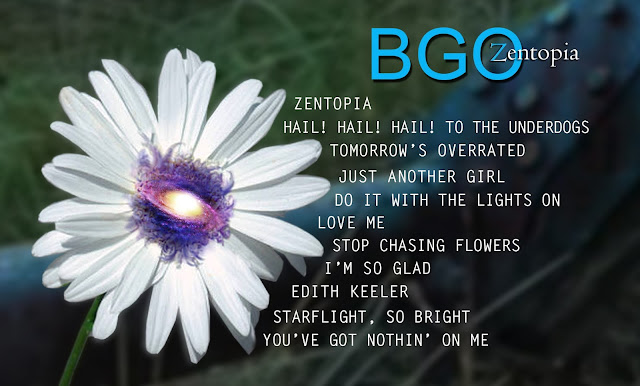 Fans who love the original series of "Star Trek" will love what comes next. "Edith Keeler" is based on the time travel tragedy of my fave episode "The City At The Edge Of Forever", where Captain James T. Kirk's romance with a young Joan Collins is lamented, replete with original dialogue. An wonderful diversion and one that is exceedingly clever. Then comes perhaps what I term classic BGO with a wonderful song lauding the songwriting ambition of none other than Starflight, the musical vehicle of the equally talented Jib Khan and his excellent tune "Dr. Radio" (to be found on the ultra impressive 2015 album "World Premiere"). This is a wonderful gesture betwixt musicians whom elobeatlesforever (elobf) continues to endorse and a song truly heartwarming to listen to before we rock out with the most perfect finale of "You've Got Nothin' On Me".  At the seventh time of asking, BGO has delivered another memorable album that twists and turns to all kinds of places before landing you safely on terra firma. Romance, rock, regret and rhythm. What a winning combination! Another BGO masterpiece indeed. ★★★★★

In a final twist, you won't be able to buy "Zentopia" anywhere in either digital or CD formats. It's free and MLH just wants you to listen to his craft. The only way that you will be able to partake of "Zentopia" is to visit the official  Bubble Gum Orchestra (BGO) web site from Tuesday 31st July onwards via these links thus: