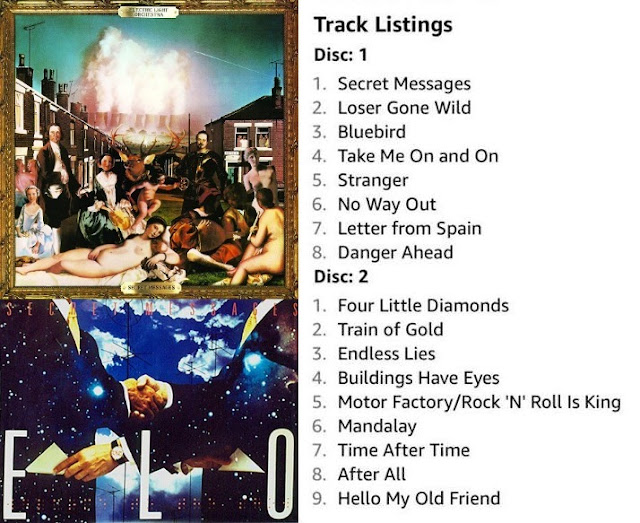 #1,417: Back in April, elobeatlesforever (elobf) hinted that a 2LP/2CD "Secret Messages" release, possibly without "Beatles Forever" was imminent in Summer 2018 so when the folks at Official Jeff Lynne confirmed it today (Tuesday 5th June), 35 years to the date when the original 1LP (JETLX527) came out in 1983, it came as no surprise to Yours Truly KJS that Friday 3rd August will finally see the issue of a "Secret Messages" double album (with digital download), albeit without a certain track.

"For the first time ever, ELO’s Secret Messages will be released as a double album on August 3rd. Listen as Jeff Lynne’s eclectic creation of self-written, self-produced songs come to life as originally conceived in 1983. This 2LP release adds six tracks to its running order, all with cutting-edge synthesizers as well as up-front guitar mastery. Pre-order here: https://lnk.to/SecretMessages"

I said in this elobf article that "A 2LP "Secret Messages" without "Beatles Forever" would be the strangest of compromises" and I still hold that opinion. At the same time, it'll be great to see a formal release for the remainder of the set, especially "Hello My Old Friend". Some fans will be disappointed and others will doubtless be delighted. For me, it's a major missed opportunity even when coupled with that forthcoming ELO 7" singles boxed set, also soon to be revealed. The question now is whether my elobeatlesforever (elobf) mission is now complete ...