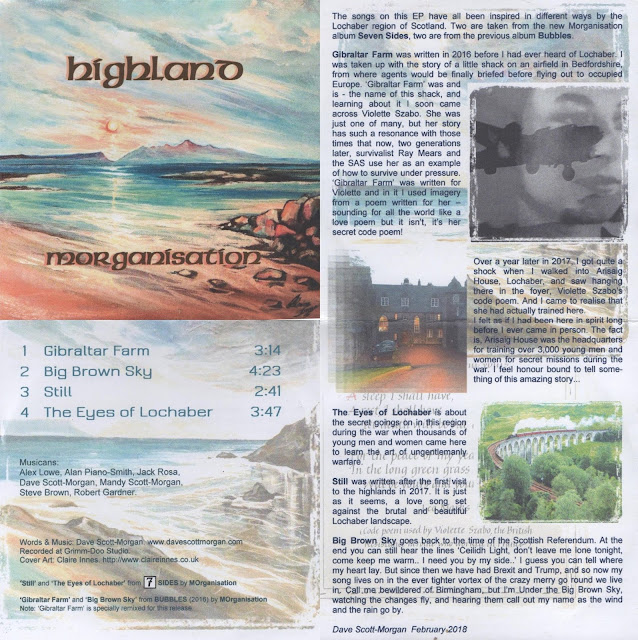 #1,410: Regular ELOBF visitors will (hopefully) remember that the Morganisation album "Bubbles" (see the ELOBF review here) was our Album of the Year back in 2016. Aside from 2017's "Wall To Wall", former ELO member Dave Scott-Morgan has been relatively quiet since, musically speaking. Hence, it was pleasant surprise for Yours Truly KJS to be handed a copy of a new four track Morganisation EP entitled "Highland" recently.

Inspired by his recent mission stay in Scotland, "Highland" is a timely release that perfectly bridges the gap betwixt the now and not yet with two songs pulled from "Bubbles" (a remixed "Gibraltar Farm" and "Big Brown Sky") and two brand new tracks in "Still" and "The Eyes Of Lochaber". Whereas "The Eyes Of Lochaber" has a lovely Celtic feel to it with its unique storytelling of secret goings on in remote places some seven decades ago, it's new ballad "Still" - a wonderful acoustic love song which reminds this particular writer a little of Jeff Lynne's 1990 solo jewel "Save Me Now" - that crowns this disc.

Therefore, based on the evidence presented within "Highland", we can confidently look forward to their forthcoming new album "7" with much anticipation and easily justify grabbing hold of this limited edition showcase of DSM's musical musings in the meantime.  ★★★★★

"Highland" by Morganisation is released on Tuesday 26th June and will be available to hear and/or buy via these links thus:

ELO Beatles Forever (ELOBF) recommends "Highland" by Morganisation to those enlightened folks who enjoy the music of ELO/Jeff Lynne, Roy Wood, The Move, 'Brum Beat', The Beatles and related artistes.