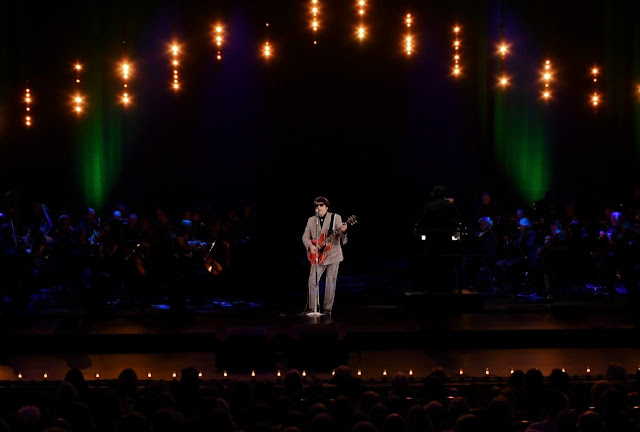 #1,401: I still remember vividly finding out that Roy Orbison - a.k.a. The Big O and co-founder of the greatest of supergroups: The Traveling Wilburys - had passed away back on Tuesday 6th December 1988. It was one of those moments that sticks in your memory forever. So when it was announced that the first ever touring hologram show starring a reimagined 3D Roy backed by The Royal Philharmonic Concert Orchestra was on the way, Yours Truly KJS was not going to miss the opportunity to witness such a unique event when it called into Birmingham's Genting Arena last night (Monday 9th April).

It was surreal and quite astonishing to see and hear Roy Orbison in person (so to speak) perform the sixteen tracks from his best selling album "A Love So Beautiful" with my own eyes and ears, particularly when my personal fave "Blue Angel" came along. I had to pinch myself as fellow concertgoers gasped at the intricacy of his hologram and the magnificent sound of the forty member orchestra backing his iconic vocals.

Starting out with "Only The Lonely" and ending with, not unsurprisingly, "Pretty Woman", the whole show was truly wondrous - a testimony to the technology developed by BASE Hologram and the legendary songbook of the man also known as Lefty Wilbury. The quality and definition of the hologram was astounding, replete with swaying tassels, swinging guitar lead and the odd "Thank you!" whilst acknowledging glance at his band as the later career trio of "A Love So Beautiful", "You Got It" and "I Drove All Night" blended effortlessly with classics "Running Scared", "It's Over" and "Crying".

It was great to see clips of ELO maestro Jeff Lynne and the late, great Tom Petty paying their tributes to Roy on the big screens (the latter quite moving as he fondly recalled Roy leaning over and saying to him "I've got some cherry cokes for later - as if it were contraband or something!") together with some wonderful montages and video footage of his concerts and records down the years. This gig was truly an experience and something very special, combining the timelessness of Roy's music with the very latest visual effects. 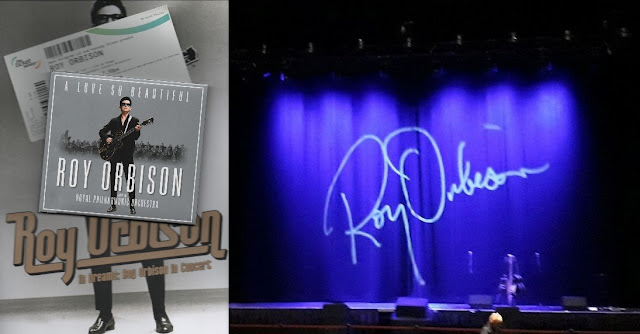 ELO Beatles Forever (ELOBF) recommends In Dreams: Roy Orbison In Concert to those enlightened folks who enjoy the music of ELO/Jeff Lynne, Roy Wood, The Move, 'Brum Beat', The Beatles and related artistes.