Kelly Groucutt: A Matter of Fox 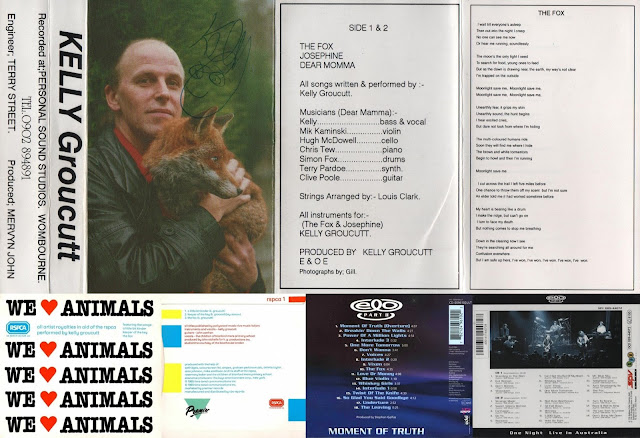 #1,387: Back in the early nineties, Yours Truly KJS was blessed to see multiple Kelly G solo gigs in and around the West Midlands at various pubs and clubs with my ELO gig buddy Christian Evans. They were great days, never forgotten and still cherished. Without doubt, Mick 'Kelly' Groucutt was a top class musician, songwriter and supreme vocalist - a vital cog in the classic ELO machine during his tenure from 1974-83. And so it was with his solo dates in Coseley and beyond.

Kelly wore his heart on his sleeve and was very much an animal lover (particularly birds) and proved it by releasing a charity EP entitled "We Love Animals" (Premier/CBS RSPCA1) back in 1995 in aid of the RSPCA. One of the tracks on that EP was "The Fox", a wonderful song written by Kelly with lyrics from the point of view of a fox during a fox hunt underpinned with stirring percussion. It was always a highlight of those intimate gigs and - after much nagging and prodding - Kelly put out a three track cassette including "Josephine" and "Dear Mama" from his self-titled 1982 solo LP that quickly sold out.

Fast forward a year or two and a new interpretation of "The Fox" was included on the second ELO Part II studio album "Moment Of Truth" (Ultrapop 0096102ULT) in 1994, introducing the song to a much wider audience before it was also included in their set list and made the 2CD live album "One Night Live In Australia" (SPV 089-44072) in 1996.

If ever there were a song that epitomised Kelly Groucutt, for me it was "The Fox" with its soaring vocals and dramatic finale. I still love the photo of Kelly with fox in hand on the above cassette sleeve (taken by Gill at Magic Arts). It was therefore no surprise that the monies raised from his memorial concert: An Evening Without Kelly Groucutt in May 2009 went to The National Parrot Sanctuary. Whether it be parrots or "The Fox", Kelly loved animals and we still miss him.