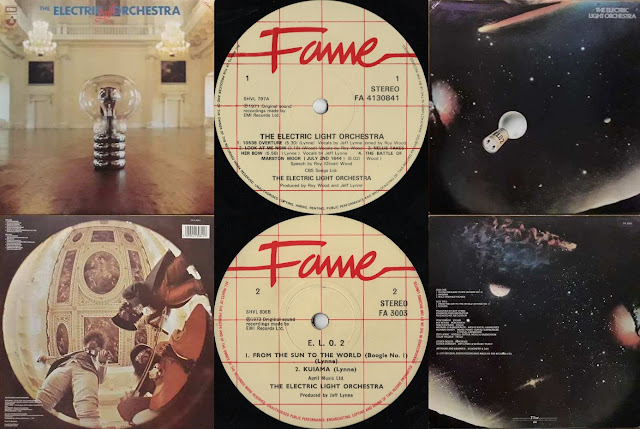 #1,384: In the hinterland between "Time" in 1981, "Secret Messages" in 1983 and "Balance Of Power" in 1986 during which time ELO maestro Jeff Lynne was also dabbling in "Electric Dreams" and producing Dave Edmunds, there was relatively little activity in terms of other ELO vinyl releases save the long overdue official UK issue of live album "The Night The Light Went On (In Long Beach)" in 1985 via Epic (EPC32700) - which signalled the end of ELO's long association with Jet Records - and a couple of noteworthy budget reissues of their first two studio albums.

Originally Harvest releases in 1971 and 1973 respectively, "The Electric Light Orchestra" (SHVL797) - also known as "No Answer" in the US due to a misunderstood secretarial gaffe - and "ELO 2" (SHVL806) were translated from gatefold to single album sleeves under the Fame imprint, being distributed by Music For Pleasure. Oddly enough, "ELO 2" (FA3003) was released first in May 1982 with "The Electric Light Orchestra" (FA3084/FA4130841) following in November 1983, replete with early barcode. Note also the change in publishing rights from April Music Ltd. to CBS Songs Ltd. in the ensuing 18 months betwixt the duo. Both were essentially Harvest pressings with original catalogue number quoted on the labels and retained in the run-out grooves. Both were also purchased by an eager teenage version of Yours Truly KJS whilst remaining a treasured part of my Electric Light Orchestra CD/LP collection to this day.