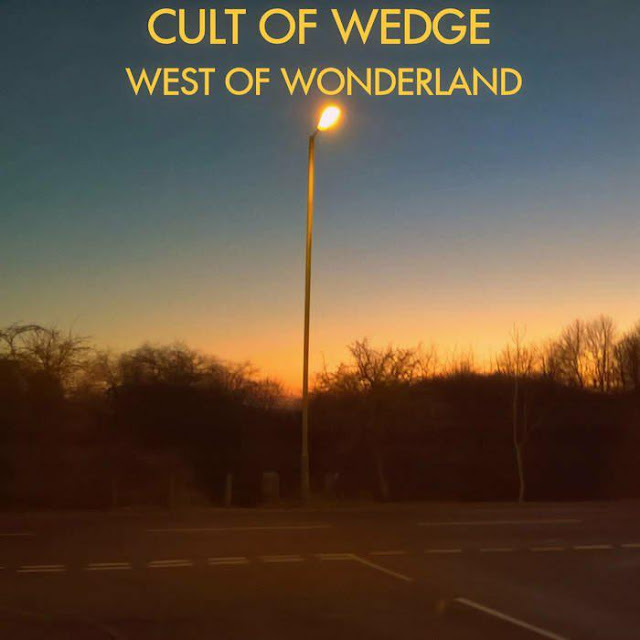 #1,379: By his own admission, Pete Hackett calls his musical vehicle Cult of Wedge a "car crash" influenced not a little by ELO and many of his other personal faves. He also says that his latest album "falls to earth somewhere in (the) late 70's, turn of the decade into the 80's" ... and he certainly ain't wrong.

New Cult of Wedge album "West Of Wonderland" is exactly that, ten songs pitched into the sonic landscape apparent when ELO were at their peak battling it out with every possible kind of music genre. What is amazing is that he has managed to produce another beauty from his bunker in deepest, darkest Rowley Regis. This is a higher tempo outing than previous offering "Loch Ness Monsters And Motherships", a little more commercial and certainly no less innovative whilst bursting with pleasing riffs, magic melodies, incisive lyrics and supremely catchy songs deserving of much wider attention. Rather than go through the tracks individually, Yours Truly KJS is going to depart from my normal review routine and recommend this quite exceptional album to you as a whole. Having said that, I simply must mention the fantastic title track, "Insomniac" - a track oozing Ric Ocasek/The Cars (also featuring the classy vocals of another fave elobf Indie artiste: Maxi Dunn) - and "Poundshop Princess", another one of those clever Cult of Wedge local social commentaries with a hint of classic Squeeze. Without doubt, Pete Hackett is an unsung purveyor of tunes from Prog To Power Pop. "West Of Wonderland" proves it and is well worth your investment. ★★★★★

"West Of Wonderland" by Cult of Wedge was released on Sunday 28th January initially via Bandcamp (priced from just £4) and can currently be ordered via these links thus:

Find out more about Cult of Wedge via these official links thus:


elobeatlesforever (elobf) recommends "West Of Wonderland" by Cult of Wedge to those enlightened folks who enjoy the music of ELO/Jeff Lynne, Roy Wood, The Move, 'Brum Beat', The Beatles and related artistes.