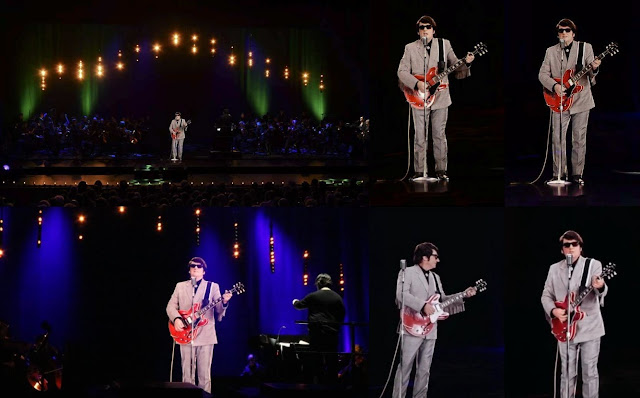 #1,382: As the much anticipated "Roy Orbison In Dreams: The Hologram UK Tour" in April gets ever closer, it was noteworthy to see Base Hologram LLC - the company behind the forthcoming audio visual spectacular - posting photos of the show via Twitter recently.Yours Truly KJS has therefore compiled the above montage of available images for you to peruse in advance of a show that will draw largely on the success of its accompanying album "A Love So Beautiful: Roy Orbison with The Royal Philharmonic Orchestra", which was the ninth bestselling album of 2017 and is still in the Official UK Album Chart Top 100 after 14 weeks. Tickets for the UK leg of the tour which also features The Royal Philharmonic Concert Orchestra are selling well evidenced by the additional date just announced at London's Eventim Apollo venue in on Thursday 19th April. Find out more about the tour and/or buy tickets here:

elobeatlesforever (elobf) recommends "A Love So Beautiful" by Roy Orbison with The Royal Philharmonic Orchestra and "Roy Orbison In Dreams: The Hologram UK Tour" to those enlightened folks who enjoy the music of ELO/Jeff Lynne, Roy Orbison, The Traveling Wilburys, Roy Wood, The Move, 'Brum Beat', The Beatles and related artistes.