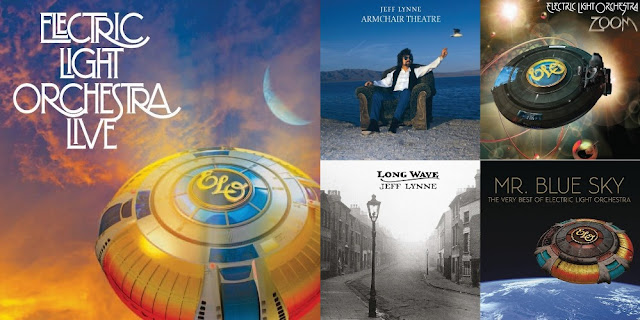 #1,381: ELO maestro Jeff Lynne announced via his social media platforms today (Thursday 8th February) that the "Electric Light Orchestra Live" album originally released via Frontiers/Big Trilby Records in May 2013 is now available to stream. The album, based on the 2001 live performance at CBS Television City promoting the "Zoom" album and ill fated tour, is the last of the five Frontiers releases to be made available again digitally. The other four: "Armchair Theatre", "Zoom", "Long Wave" and "Mr. Blue Sky", were actually made available to stream (according to amazon.co.uk) from Friday 12th January 2018.

Note that the 'new' releases cite the label as Columbia/Legacy for the ELO titles and Legacy for the Jeff Lynne solo records. Again there is no mention of Big Trilby Records with the ownership stated as being by "Daft As A Brush, Inc. under exclusive license to Sony Music Entertainment". A physical release of the above quintet is expected to follow later this year. Find out more via these links thus: