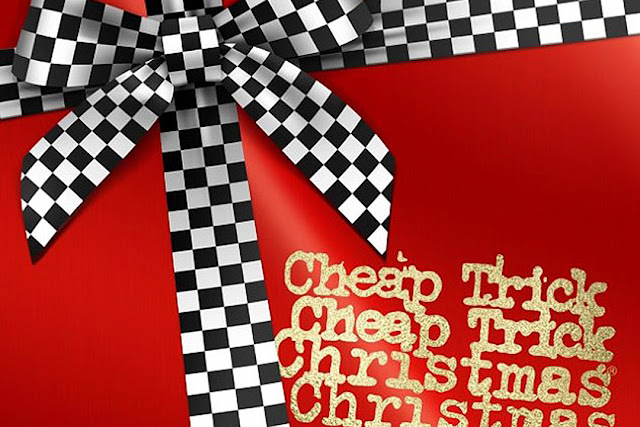 #1,356: Whilst travelling to and from Roy Wood's annual Christmas spectacular Rockmas 2017 in Birmingham on Saturday night (16th December), my good friend John Collins (who is also proprietor of the fab Forever web site) ensured that Yours Truly KJS had a blast or three of Cheap Trick's impressive "Christmas Christmas" album, being as it includes their take on a certain festive fave as penned by Dr. Roy Wood. Here, therefore, is the very first guest album review written by John for elobeatlesforever (elobf) thus:

"Good friends and long time fans of Roy Wood, US Rock band Cheap Trick have just released their new album "Christmas Christmas". Anyone who is anyone these days eventually has the idea of recording a Christmas album, the problem is they are all a variation on the same theme. Where this album differs somewhat, is that although there are covers, they are not the normal ones you would hear on 90% of Christmas albums. There are three songs written by Cheap Trick for the album, including the opening track "Merry Christmas Darlings", a great catchy track which is just fun, a theme running through the album. The other two songs by the band are "Our Father Of Life", a nice ballad (its not all 100MPH rock!) and the title track which is another fun rock and roll number, with an interesting party like ending!

Track two comes as no surprise, a cover of Wizzard's "I Wish It Could Be Christmas Everyday", and track four is Mr. Lea and Mr. Holder's "Merry Xmas Everybody". Not a bad stab at either of them. Great to see those covered, as you must remember this album will be played and sold mainly in the US. Some other stand out tracks on the album is a cover of The Kinks' "Father Christmas", some rather amusing lyrics in this one. There's a cracking version of The Ramones "Merry Christmas (I Don't Want To Fight Tonight)" and there is a wonderful ballad called "Remember Christmas", written by Harry Nilsson. I think you will also enjoy two cracking rock (almost punk) versions of "I Wish It Was Christmas Today" and "Run Rudolph Run" - I know I did! Other tracks include rather nice versions of "Silent Night" and "Please Come Home For Christmas". I have heard the album five or six times now and thoroughly enjoyed it, please have a listen. I am recommending it to you all!" ~ John Collins/Forever