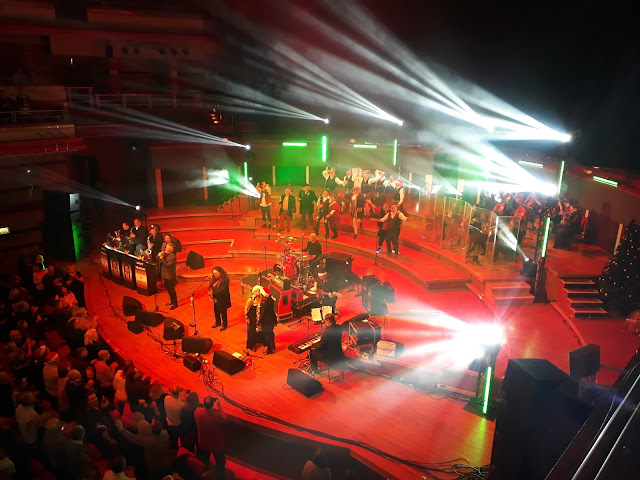 #1,355: When Roy Wood's Rockmas 2017 was announced back in August , the man who brought us The Move, ELO, Wizzard and a plethora of hit records promised that his annual festive bash would "rock the roof off Symphony Hall". And Rockmas 2017 did not disappoint as the 2,000 strong audience were treated to a musical variety showcase with Mark Radcliffe's Galleon Blast, comedian extraordinaire Kev Orkian, acclaimed singer Paul Young, The Enigma Strings and Birmingham Irish Pipes & Drums all contributing to a thoroughly enjoyable evening at the aforementioned Symphony Hall in Birmingham last night (Saturday 16th December). 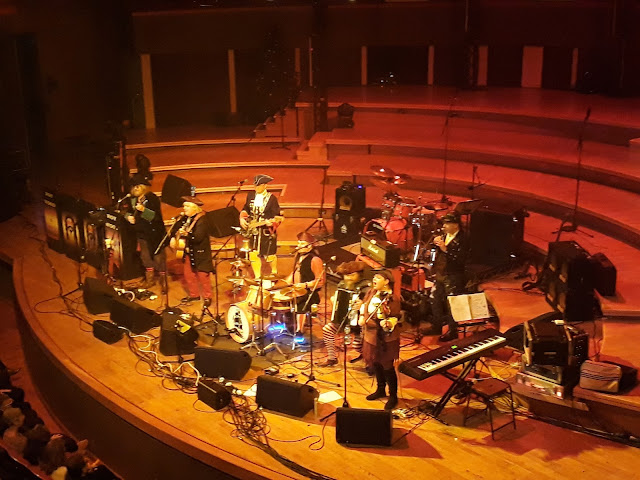 Galleon Blast - headed up my BBC Radio 6 folk maestro Mark Radcliffe - were first up on stage and instantly evoked memories of the first Electric Light Orchestra album with their tricorn hats and pirate garb before embarking on a colourful 45 minutes set of self composed sea shanties and the odd cover. The effervescent Cheshire septet were a revelation were warmly received by their audience with "Port Satan" catching the eye (and ear) as well as their excellent renditions of The Pogue's "Fairytale Of New York" and "Shakin' All Over" - not surprisingly their interpretation of a song originally recorded by Johnnie Kidd & The Pirates! 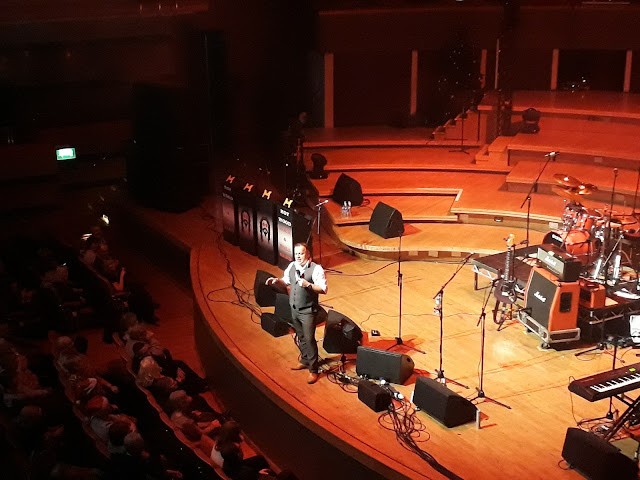 Comic Kev Orkian is very funny. He was funny last year and he was even funnier this time around too with an inspired routine including his take on Armenian versus pop music through the decades. Kev is still one of the funniest if not inventive comedians that Yours Truly KJS has come across. 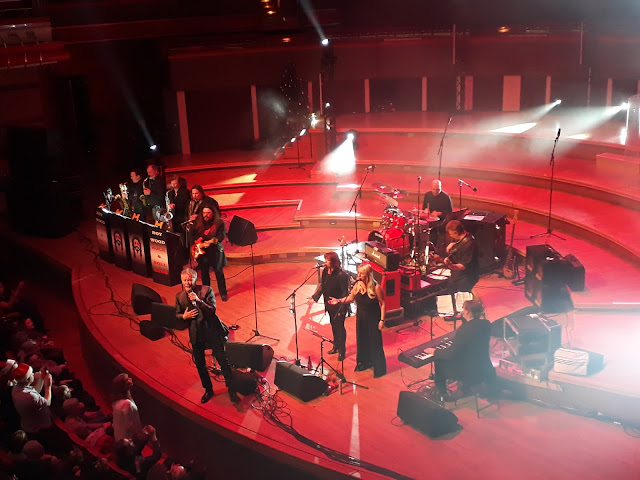 A few eyebrows were raised when it was revealed that Paul Young of Streetband, Q-Tips, Los Pacaminos and (of course) major solo fame was unveiled as the special guest for this years Rockmas show. And it proved to be an inspired choice as Paul delivered a fab four song cameo in the midst of Roy's set that included all three Top 10 hit singles from his 1983 "No Parlez" album and a smooth cover of "Some Kind Of Wonderful". 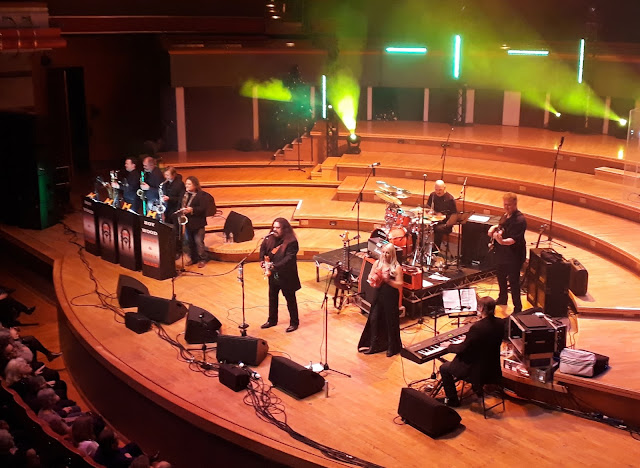 Either side of Paul's soul interlude was another storming set from our very own Wizzard Dr. Roy Wood. All the hits were there as Roy gave his fans and followers another reminder of his astounding career with the help of his superb Rock & Roll Band. The now familiar sight of Roy manhandling his bagpipes during "R U Red E 2 Rock" with the massed ranks of the Birmingham Irish Pipes & Drums band in support is always a highlight and it was no different this year! 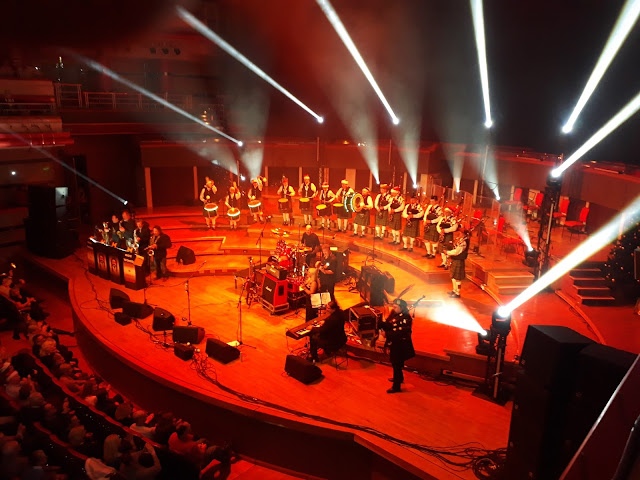 This concert was also a mutual admiration society reunion as songs such as "Fire Brigade", "California Man" and "See My Baby Jive" (perhaps the most perfect pop song ever in my opinion) had us all singing (and dancing) in unison as in advance of a finale that included those lovely orchestrated versions of "Flowers In The Rain" and "Blackberry Way" with The Enigma Strings in full sway before all descended on the stage for the barnstorming if not much anticipated closer (and current #22 hit single) "I Wish It Could Be Christmas Everyday". If nothing else, this event should remind all in the Midlands - if not the country and beyond - that Roy Wood is a modern music legend and worthy of significantly more recognition beyond a certain Christmas classic (this was echoed heartily by Mark Radcliffe on the night). The news gets even better as tickets for next years Rockmas on Sunday 2nd December are already on sale via this link thus:
www.thsh.co.uk/event/roy-woods-rockmas-2018
The Roy Wood Rock & Roll Band performed: "Brontosaurus/Intro" ~ "California Man" ~ "Ball Park Incident" ~ "Kiss Me Goodnight, Boadicea" ~ "Fire Brigade" ~ "New York City" ~  "I Can Hear The Grass Grow" ~ "Angel Fingers" ~ "R U Ready 2 Rock" ~ "See My Baby Jive" ~ "Wherever I Lay My Hat (That's My Home)" (with Paul Young) ~ "Love Of The Common People" (with Paul Young) ~ "Some Kind Of Wonderful" (with Paul Young) ~ "Come Back And Stay" (with Paul Young) ~ "Flowers In The Rain" (with The Enigma Strings) ~ "Blackberry Way" (with The Enigma Strings) ~ "I Wish It Could Be Christmas Everyday" (with Galleon Blast, Kev Orkian, Paul Young and  The Enigma Strings) 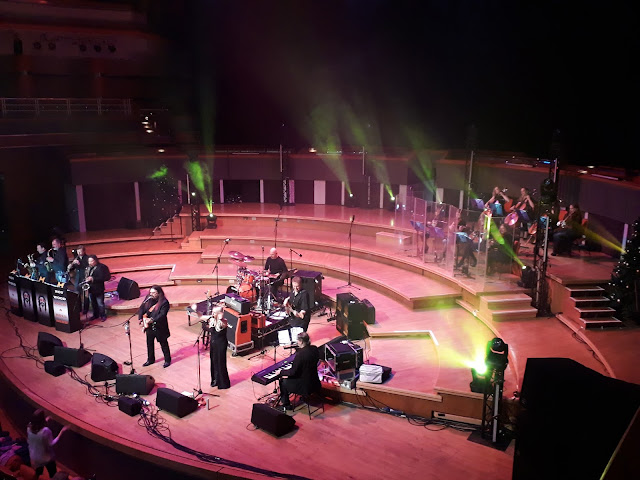